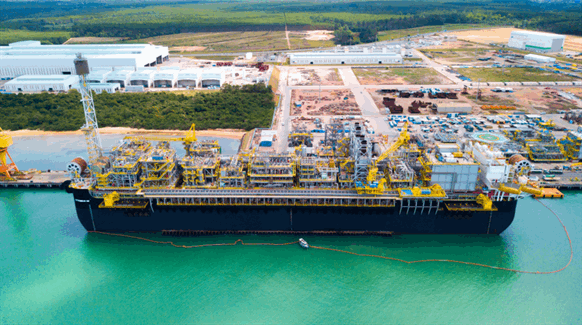 This photo, released in September of this year, shows the newly completed P-68 FPSO at the EJA shipyard in Aracruz, Brazil. PHOTO SOURCE: Sembcorp Marine

“It has been a banner year for Shell Brasil,” Wael Sawan, Shell’s upstream director, commented in a written statement emailed to Rigzone. “From winning new acreage to setting records in drilling and production, the country continues to solidify its place as a heartland in our Upstream portfolio.”

According to Shell, P-68 can process up to 150,000 barrels of oil and 6 million cubic meters of natural gas per day. The FPSO features 10 producing and seven injection wells, the consortium member added.

In a separate announcement, Petrobras stated that P-68 is located in the Berbigao field at an approximately 7,480-foot (2,280-meter) water depth roughly 143 miles (230 kilometers) off the coast of Rio de Janeiro state. The company stated that oil produced at the FPSO will be offloaded to shuttle tankers and gas output will be transported via pre-salt gas pipeline routes. Also, it noted that P-68 will be interconnected to new wells in the Berbigao and Sururu fields in 2020.

Petrobras added that P-68 is its fourth FPSO start-up this year, following P-67 in the Lula field and P-76 and P-77 in the Buzios field.

For Shell the P-68 startup adds to its Brazil deep-water portfolio, which the company stated includes the Iara development – a new pre-salt production frontier. Moreover, Shell noted the latest startup marks the first step in developing the large resource potential at Sururu.

“Brazil is home to some of the best deep-water opportunities in the world and we look forward to working with Petrobras and other partners to progress additional development plans,” Sawan stated.