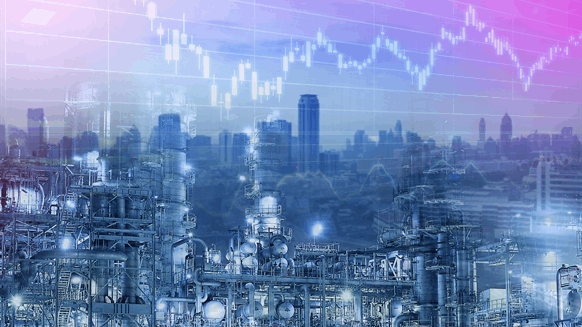 Royal Dutch Shell Plc has made $1 billion from trading fuel oil this year, making it one of the standout winners from rules designed to make the shipping industry greener.

(Bloomberg) — Royal Dutch Shell Plc has made $1 billion from trading fuel oil this year, making it one of the standout winners from rules designed to make the shipping industry greener.

Shell said last month that it made substantial money in fuel-oil trading in the third quarter, but the company didn’t disclose the size of the profits. Shell traders celebrated hitting the $1 billion mark so far, likely the biggest by any one company in fuel oil this year, by ringing a bell on the company’s trading floor in London earlier this month, people familiar with the matter said.

The fuel-oil market has been shaken this year by the so-called IMO 2020 new regulations that ban the use of high-sulfur fuel oil, known as HSFO, to power ships. The rules are aimed at combating human health conditions such as asthma and environmental damage including acid rain. Prices are collapsing because the global shipping fleet, which burns more than 3% of the world’s oil, will instead have to consume very low sulfur fuel-oil, or VLSFO.

Although better known for its oil fields, refineries and pump stations, Shell runs an in-house trading business that’s larger than the better-known independent oil traders like Vitol Group, Glencore Plc and Trafigura Group, handling 13 million barrels of oil equivalent per day. The company describes itself as “one of the largest and most experienced energy merchants in the world” with major trading floors in Houston, London, Dubai, Rotterdam and Singapore.

Europe’s largest oil company told investors that its downstream business, which includes refining, oil trading and fuel stations, benefited during the third quarter from “stronger contributions from oil-products trading and optimization, mainly fuel oil.” In a conference call with analysts, Jessica Uhl, Shell’s head of finance, said the company’s traders benefited from “the change in the fuel standards” linked to IMO 2020, the name by which the ship-fuel rules are widely known.

It’s unclear exactly how Shell’s traders made their profit, but premiums for fuel that’s lower in sulfur have surged this year, potentially benefiting those companies that produce more of the product. Shell’s refining system is a relatively sophisticated one, something that could put the company in a better position as the regulations enter into force. The margin to produce high-sulfur fuel oil in Europe recently slumped to a more than 10-year low, according to the International Energy Agency.

The new shipping rules allow traders to produce blended fuels, including mixing so-called low sulfur fuel-oil, or LSFO, mainly used in power stations that burn the fuel to produce electricity, with diesel to produce VLSFO. The spread between high and low sulfur fuel-oil blew up to almost $30 a barrel in late October, compared with an average of about $2 a barrel in 2018, according to the International Energy Agency.

–With assistance from Jack Wittels.

Javier Blas in Dubai at jblas3@bloomberg.net;

Alaric Nightingale in London at anightingal1@bloomberg.net