Aribo, Ajayi set the cat amongst the Super Eagles in Brazil draw 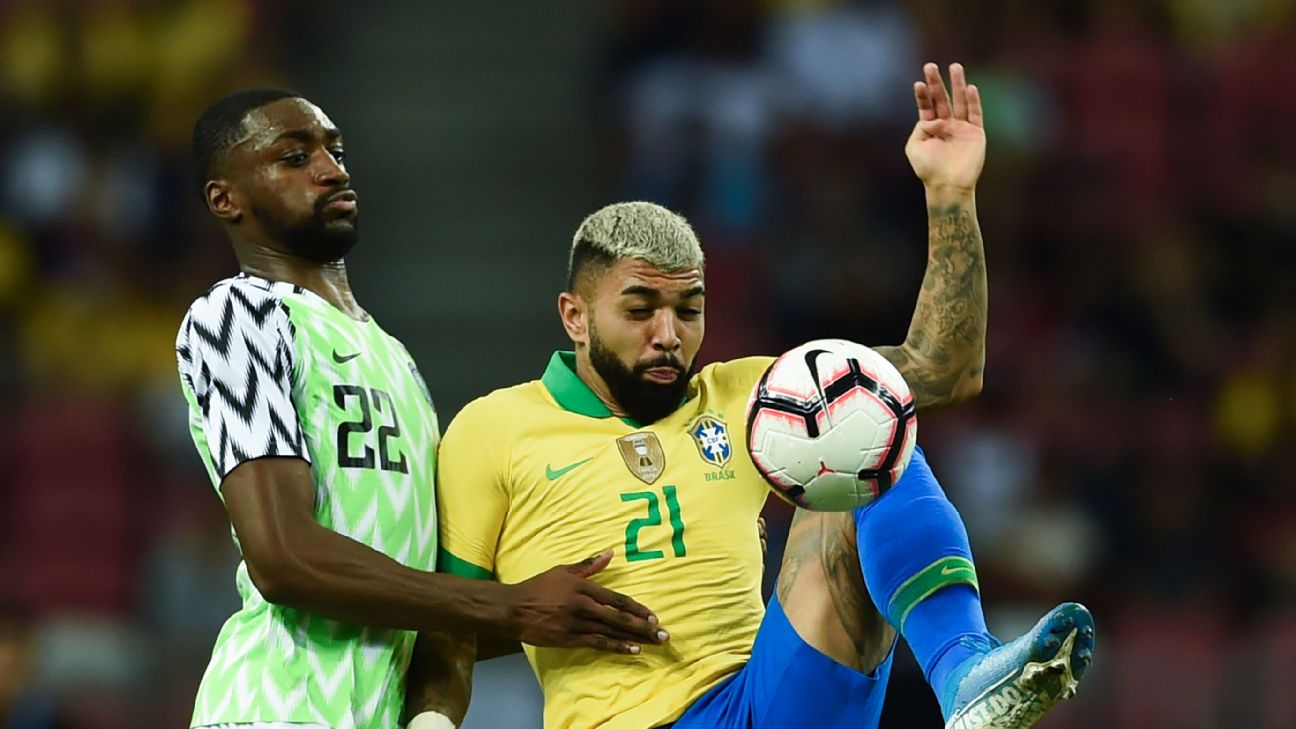 Joe Aribo and Semi Ajayi are not supposed to be starters for Nigeria’s Super Eagles, but after two excellent efforts in recent weeks, including a 1-1 draw against Brazil this past weekend, coach Gernot Rohr will have much to consider.

When they both started the last friendly against Ukraine, it didn’t look anything out of the ordinary. Aribo and Ajayi did so by default, filling in for two players who had withdrawn from injury. Aribo for Wilfred Ndidi and Ajayi for Kenneth Omeruo.

One month on and repeat pullouts once again saw both players handed starting shirts against Brazil. It was Omeruo again who begged off in defence, and in midfield, while Ndidi returned, Oghenekaro Etebo took his turn to pull out with injury.

It turned out to be a another good day for the stand-ins. Again. Ajayi cut an impenetrable figure in defence, and Aribo went and got himself his second goal from his first two international starts.

Which means it looks as if those withdrawals are about to have permanent consequences for the starting lineup going forward, not to mention a gargantuan selection headache for Rohr.

Ajayi cut an imperious tower in defense, playing at centreback alongside William Troost-Ekong, where his imposing figure harkened back to days of the gentle giant Uche Okechukwu.

The West Bromwich Albion defender, who can play as a right back and central midfielder, was a bulwark against the fearsome Brazil frontline of Neymar (who left early to injury to be replaced by Phillipe Coutinho), Roberto Firmino, Richarlison and Gabriel Jesus.

Troost-Ekong has made it a habit to look good in defence, but he looked even better with Ajayi beside him. But Ajayi’s most important contribution, as he did against Ukraine, was his ability to gobble up aerial bombardments.

It is instructive that it was one of the few headed battles he lost that led directly to Brazil’s equalizer, after Aribo had given the Super Eagles the lead.

If there’s to be any complaint about his performance, it was his tendency to drift way up the pitch, and into territories that centrebacks are not supposed to chart.

As for Aribo, his first two international appearances could not have gone any better. He scored on his debut against Ukraine, then followed it up by scoring against Brazil, and not a second string either.

Even with that notch on his belt, it was a measure of the Rangers man that with 82 minutes on the clock, Aribo still had the lungs and the will to hunt down Richarlison on a dangerous break, block the pass, then nick the ball from the Everton man.

And deep into stoppage time, his own breakaway forced a professional foul from Thiago Silva which, a few meters closer to goal could have been a red card.

So now, these two men who were low down the depth chart have provided reason for Rohr to develop a few more grey hairs. Benin and Lesotho are up next month in two 2021 Africa Cup of Nations qualifiers. With all his players fit and available, who does the German pick to start?

Omeruo has improved so much this past year at Leganes that he has become a stalwart in that Nigeria backline and showed it at the Afcon. But how does Rohr justify dropping Ajayi? Or does he go for three at the back?

It is the same thing in midfield. Aribo may not score in his next game for Nigeria, but he doesn’t need to. What he offers is his energy, tidy play, and the constant threat of a goal, which means that dropping him could well set off Twitter rants across the nation.

But who goes out? Ndidi is virtually untouchable. Etebo, when fit, offers different looks in both attack and defense and – contrary to some opinion – Alex Iwobi puts on a good shift behind the striker.

Just a few months ago, Ajayi was getting cut from Nigeria’s Afcon 2019 squad, and few Nigerians had even heard of Aribo. How times have changed.

He has taken flak for his game management, but Gernot Rohr went some way to answering his critics. For one, his team played with great shape and kept one of the most dangerous national team strike forces at bay for 90 minutes and change.

He also broke from his usual tradition, giving almost all the new call-ups game time. So Maduka Okoye may not have got his time in goal if not for injury to Francis Uzoho, but at least Rohr picked him and not Ikechukwu Ezenwa.

Uzoho took plenty of criticism leading up to Afcon after his error against Seychelles. But he has bounced back and cemented his place as the Super Eagles’ number one… and then gets injured. While it was a chance for Rohr to hand Dusseldorf goalkeeper Okoye his debut, it is still a bit worrying for the lad.

Meanwhile, Peter Olayinka saw himself involved along with Ramon Azeez, as did Dennis Bonaventure. All provided great opportunities to have the rule run over them.

But Paul Onuachu will need to do some to convince Nigerians he is the best backup forward to Victor Osimhen, after play continually broke down at his feet.