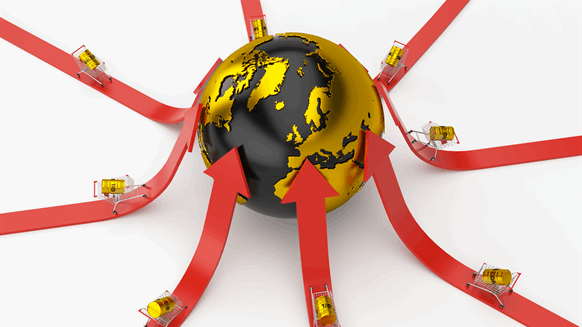 Regardless of control, new investments in finding and producing more oil are required.

The answer to the question posed is a tricky one. If we simplistically look at proven oil reserves, the answer is obvious: mostly OPEC and Russia. According to BP, the global authority on the subject, this collective group of 16 countries owns 1.35 trillion barrels of proven oil reserves, or nearly 80 percent of the world’s total. Yet to be sure, there are outside questions as to how much oil OPEC in particular actually has. Unlike the U.S. reserves, which get monitored by the Securities and Exchange Commission, those in OPEC’s Member Countries are not independently verified. In short, BP and other reporting agencies must simply take them at face value.

In any event, reserves are just a subset of the much larger oil resource. They represent how much oil can be produced today under prevailing prices and technologies. Both of these factors are always in flux, however, and their changes can lift more of the resource into the reserve category. For example, although recognized for holding 10 percent of the world’s proven oil, most of Canada’s massive oil sands deposits in Alberta only become accessible if prices are high enough. In the U.S., the emergence of shale shows how oil that was unavailable just a few years ago can become reachable as extraction technologies relentlessly advance. The EIA reports that the world has 420 billion barrels of recoverable tight oil, potentially offering other nations such as Argentina and China, for instance, a chance at better control.

The next assessment in global oil control is the actual production of the commodity itself. Not surprisingly, OPEC and Russia control 50-55 percent of all output. Even with the U.S. shale revolution, the influence of this bloc remains undeniable: its 1.2 million b/d production cut agreement has put a floor under the global market. Even more importantly, Russia and OPEC’s de facto leader Saudi Arabia control a combined 25-30 percent of all exports. This is essential leverage for these two oil-obsessed nations because nearly 75 percent of total oil usage is internationally traded. But, as the world’s largest liquids producer at 15-16 million b/d, huge export plans for the U.S. will give the country a firmer grip on the global market. Also giving the U.S. outsized influence is the fact that its dollar is the global currency used in trading oil. Indeed, America’s shale boom will continue to act as a counterweight to OPEC and Russian control. A clear example of rising U.S. influence was the recent drone attacks on Saudi Arabia’s oil facilities, where 5 percent of the world’s supply was quickly taken offline. Prices did jump 15 percent but pulled back again in a matter of days. That is because ongoing record U.S. crude production has helped make the global market less vulnerable to price shocks. Looking ahead, the surging Permian basin has the U.S. expected to account for at least 80 percent of new oil supply over the next five years or even beyond. There cannot be any production cut deal here, of course, or producers would face collusion charges from the federal government.

Regardless of who controls the world’s oil, however, we know that new investments in finding and producing more are required. Oil is the world’s most vital fuel with no significant substitute, making new demand a constant reality. One primary problem is that the oil industry has delayed and/or canceled numerous mid- and large-scale projects, especially during the 2014-2017 price collapse. To avoid a potential shortfall and price spike, IEA estimates that some $700 billion is needed in annual E&P spending for decades to come. All investments are important because oil is the ultimate global commodity, where events in one country can negatively impact the market everywhere. Thus, more control over the world’s oil will be granted to those nations that invest the most in new production.

NPD Gets Back Most of Swindled Funds  | Rigzone