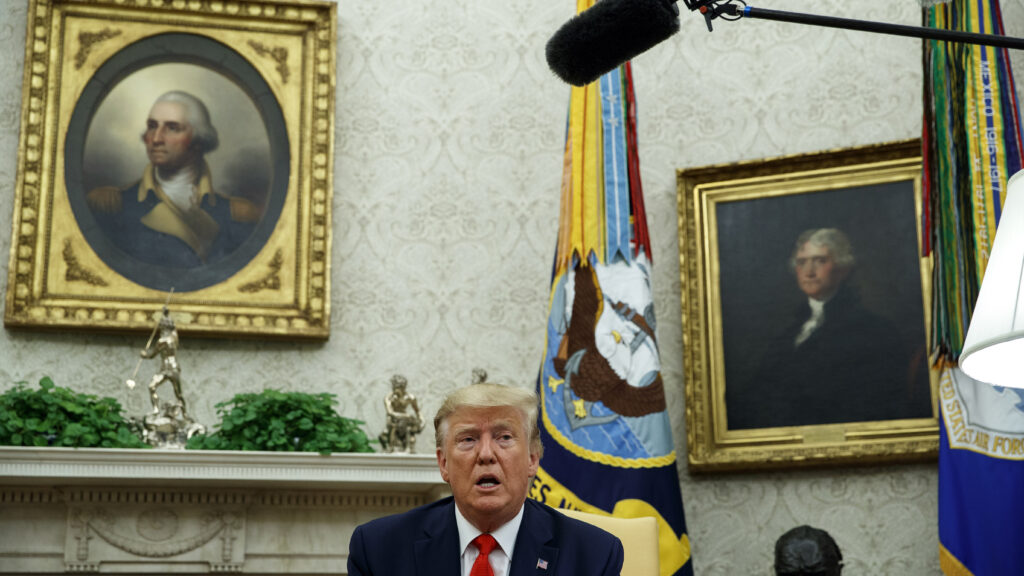 The Trump administration’s apparent decision to back off a plan to ban flavored e-cigarettes has outraged public health officials and others, who warn that the president risks making a decision that is politically expedient but that will do lasting damage to American health.

Some experts also believe President Trump may be underestimating the potential blowback over the decision.

Trump’s retreat from the ban, at least for now, is said to reflect concerns that any such move could have a dramatic impact on vape shops and other small businesses, many of which are seen as key supporters of his reelection campaign. Although the White House said no final decision has been made, a variety of signals from the administration have aroused wariness among public health officials pressing for a ban. The Washington Post reported late Sunday that Trump refused to sign a one-page “decision memo” that would have been the final hurdle.

“Gradually we were sensing an erosion of his commitment,” said Dr. Robert Jackler, a Stanford researcher who has studied tobacco industry advertising to adolescents and has testified before Congress about youth e-cigarette use.

A federally funded study published earlier this month found that an estimated 4.1 million high school students and 1.2 million middle school students across the U.S. currently use e-cigarettes. That study also found that mint and menthol e-cigarettes are now nearly as popular among high schoolers as fruity flavors like mango. The widespread popularity of vaping among young people — compounded by an outbreak of vaping-related lung illnesses — has set off a scramble to curb the crisis.

The flavor ban was widely seen as a step in that direction. But now tobacco control advocates, who have been frustrated for nearly a decade over what they’ve seen as inaction by both the Trump and Obama administrations, are facing the potential of yet another disappointment.

Although Congress passed the landmark 2009 Tobacco Control Act, empowering the FDA to impose tighter regulations on cigarettes and other forms of tobacco, advocates cite a string of missed opportunities in Washington. The Obama administration rejected a flavor ban in 2016 similar to the one up for consideration now following an intense lobbying blitz from tobacco companies; the Trump administration later gave e-cigarette makers nearly five years to come into compliance with FDA rules, all the while they were allowed to stay on the market.

“Everyone was so optimistic when Obama signed the Tobacco Control Act into law,” said Eric Lindblom, a former FDA official who is now a tobacco control expert at Georgetown Law. “The theory was, ‘we’re taking this out of politics.’”

“It just hasn’t happened,” Lindblom added. “Each time you think something good’s gonna happen it turns out to be an illusion.”

Tobacco control advocates were hopeful after the Trump administration indicated it would take flavors off the market until manufacturers sought the FDA’s permission to come back on the market. In an Oval Office meeting in September, Trump said: “We can’t allow people to get sick. And we can’t have our youth be so affected.” Earlier this month, tobacco control advocates met with White House officials on the proposed flavor ban.

Their biggest fear at the time, a number of participants in that meeting told STAT, was that the White House would water down its proposal and exempt menthol flavored tobacco from the ban. None of the advocates said they had any inclination Trump might walk away from his promise entirely.

Several public health experts told STAT that while the shift in the Trump administration’s stance might appease voters in the vaping community, it underestimates the potential impact of outrage over any reversal.

“This can easily become a litmus test political issue for parents, educators, and the health care community,” Jackler said.

“The president is getting very bad political advice,” said Matthew Myers, president of the Campaign for Tobacco-Free Kids.

It’s a litmus test, too, however, for the vaping industry and e-cigarette users who have pushed against new regulations that would rein in the market. The industry widely praised the pivot away from the flavor ban, but many vaping advocates remain deeply concerned about a court-ordered May 2020 deadline for e-cigarette manufacturers to file applications with the FDA to keep their products on the market.

“This is a temporary stay of execution,” said Alex Clark, the chief executive officer of the Consumer Advocates for Smoke-Free Alternatives Association.

“Unless that deadline is delayed, the net result is the same: Thousands of shops are going to be closed down,” he added.

Clark said that while Trump has won supporters in the vaping community by backtracking on the flavor ban, that remains “a fragile commitment” unless the 2020 deadline is delayed. “You could see a lot of people who feel supportive right now staying home in November, or casting a protest vote,” he said.

On the other side of the debate are public health officials, who see a president putting politics over a pressing health crisis.

“To put the health of our children on a political podium is unconscionable,” said Bonnie Halpern-Felsher, a psychologist who studies youth tobacco use at Stanford.

Medicare Opts to Cover Acupuncture for Pain Amid Opioid Crisis