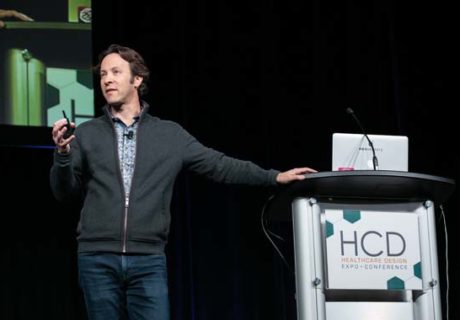 The 2019 Healthcare Design Expo & Conference in New Orleans got attendees’ minds thinking during the opening keynote presentation by David Eagleman, a neuroscientist, inventor, author, and host of PBS’s “The Brain.”

For the past 20 years, Eagleman has focused his career on understanding the make-up of the brain and its role in shaping a person’s creativity, hopes, and desires. For example, the brain takes the activities that people perform repeatedly and automates them. This allows the brain to use less energy to run routine tasks, but it can also lead to taking the path of least resistance, or being stuck in a rut, especially when it comes to creativity and developing new ideas.

The good news, Eagleman said, is that the brain has “live ware,” or brain plasticity, meaning it’s always adapting, rewiring, and restructuring itself to face new challenges. However, this works only if people push it. “Challenge yourself to create new pathways,” he said

This goal, he said, is especially important as society moves from an “information economy” to a “creative economy,” adding that organizations trying to drive creativity face a three-headed problem: the future is hard to predict, many ideas fail, and, lastly, even good ideas don’t last. “Forward thinkers wrestle with these three ideas,” he said.

The key is to push the unconscious, question everything, and find multiple solutions. “Never imagine that there’s a single answer to anything that we’re trying to solve,” he said. “Generate ideas to get off the path of least resistance.” He acknowledged there’s a tradeoff between exploring the unknown and staying too close to what’s familiar.

“There’s a risk of going too far where no one will follow,” he said. To find sweet spot where people will be inspired, Eagleman suggested trying out ideas that go different distances from the norm. “Cover the spectrum from the familiar to the outermost boundary,” he said.

Furthermore, Eagleman challenged attendees to set up a culture within their organizations where failure is tolerated “If you want to design creative spaces, make sure you build creative spaces for yourself,” he said. However, there’s no single answer to what a creative workplace should look like; rather, he noted that it’s about switching it up, altering how we do things, and keeping things active.

“Seek novelty, avoid dogma, be filled with awe and wonder, and celebrate possibility,” he said. “It’s the best thing that you can do for your brain.”

Working hand in hand: A better network for streamlined workflows