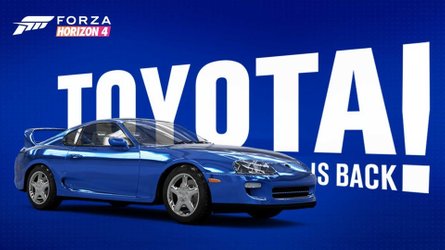 The last games from the popular racing franchise developed for Microsoft’s Xbox console to have Toyota road cars were Forza Motorsport 6 and Forza Horizon 3, with the latest titles – FM7 and FH4 – only featuring a selection of racing models. The good news is street-legal Toyota models are finally making a return with the Series 17 update planned for Forza Horizon 4 to go live on December 12.

The first car to roll out will be a 1998 Supra RZ, but there are more to come as the game’s community manager, Brian Ekberg, announced that Toyota’s luxury division Lexus is also part of the deal. Not only that, he did not exclude the possibility of introducing Scion models further down the line. Design director, Jon Knoles, explained the reasoning behind choosing this first car by saying it’s “everybody’s favorite Supra,” adding “there’ll be more to come.”

While it’s certainly nice to hear street Toyotas are coming back to the Forza franchise, it’s worth mentioning there are other popular racing games that still don’t have any models from the brand. We’re talking about The Crew series, Need For Speed Payback and Heat, while Codemaster’s Dirt series hasn’t had a Toyota since DiRT3 came out back in 2011.

Speaking of NFS Heat, you might remember that tweet from Toyota U.K. published (and deleted soon after) in August about the reasoning behind staying away from the game, saying it promotes illegal street racing. Another tweet from the same month said: “Officially, Toyota Motor Corporation has no concrete plans to license its model range to any other games besides Gran Turismo Sport at the moment.” It now looks like the company has had a change of heart as soon you’ll be able to drive a fourth-gen Supra outside Polyphony Digital’s game.

Rest assured Toyota cars are here to stay in Forza games as Brian Ekberg said they’ll be featured “for years to come.” It is believed the automaker had some sort of exclusivity deal with Gran Turismo, which now appears to be over and more people will be able to enjoy their favorite Toyota models on the Xbox and PC.