Why Teachers Need One Another: An Argument For Collaboration 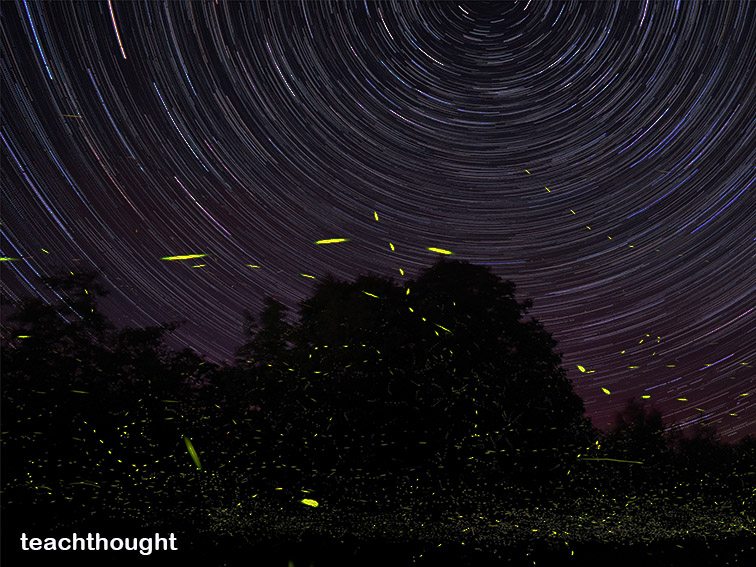 Why Teachers Need One Another: An Argument For Affection And Collaboration In Pedagogy

During summer evenings here in Kentucky, it’s never all the way dark.

Stars pierce the sky, etching the jagged canopies of Oak, Maple, and Sycamore trees against what we forget is literally the universe itself.

It’s also never all the way quiet; the air is thick and wet and alive, vibrating with sound. Crickets rub bone to bone, making a kind of electric purring that sits at the back edge of your mindscape, only ever recognizable if you’re able to stop your own thinking. Cicadas can’t help themselves, droning on in the dark madly, endlessly; one tree will rise in sound, starting low and pushing itself to a soft frenzy, only to grow quiet again, panting, while the tree next to it fills the quiet with its own version of summer lust.

Every now and then, two trees will start their sound in parallel (it’s unclear if this is some kind of selfishness or agreement), and the sound is mesmerizing–a gentle crash of sound that’s strangely fluid. And contrasting the chaos above and around is the slow dance of lightning bugs mingling in the evening air moving soundlessly, their blinking a kind of vulnerability that reaches out in every direction.

Somewhere in all of this–or behind it–there’s a lesson for me.

About five years ago, I took a job in, what for me was, an unhealthy work environment. It just wasn’t a good fit. I was, in a way that’s hard to explain, alone as a professional. Not independent, but standing stark and pale against my environment. Ego, social expectations, professional accountability, and money forced me to stick it out longer than I should’ve. The cost for me was a pervasive sense of anxiety that I had never felt before in my life (I was 35 at the time), and that I continue to confront and understand today.

Or at least I think that’s the way it went. It’s not always easy to separate cause from effect, and ultimately it all goes both ways anyway. One thing touches everything. As far as anxiety goes, I’ve never been overly nervous or worried. I played a lot of very competitive sports and never felt anything more than butterflies. I’ve always been a very sensitive person, which can be exhausting. I don’t get way up and way down, but when I feel things I feel them. I’m frustratingly sentimental. Love listening and being heard. Prone to nostalgia.

Being in love as a teenager was terrible. I can still hear the first few notes of certain songs, and I’m there all over again. You know. There. That first time you reached out for their hand and they took it in and the sky arched itself parallel with the shape of the universe, which also felt–vaguely–like the shape of your soul and everything–for a moment–felt whole. Ugh. It was terrible.

I tend to be overly transparent in an attempt, I think, to feel connected to other people because I think people are meant to love one another, and connecting and mutual understanding is a decent first step. I’ve always had this compelling instinct that human beings are amazing and the natural world is overwhelming beautiful, and we all walk around with our eyes closed to it all. Or even when we can open them, they just can’t open wide enough to take it all in, like sticking your head out of the window of a car on the interstate and not being able to breath.

Right, so, the anxiety. After five years of having it under control, about two months ago, it came back. Yay. Not sure why (working on that part) but it’s not been fun, and has impacted my work–writing, productivity, etc. Created both discomfort and fatigue. This time, I took a multi-faceted approach: I changed my diet, doubled an already active exercise routine, started hot yoga, began practice with both moment-by-moment mindfulness, and meditation. I went to the doctor to see if medication made sense, clarified and bolstered my own support system, and reduced my workload.

So far, so good. These are all steps in my journey–one being an educator is a part of. Separating one’s self from one’s work is a problematic illusion. I know none of this is especially compelling or insightful; I wanted to use this post not as some viral contribution to the conversation of modern teaching and learning, or even as a dumping ground for my heart, but rather as encouragement to take care of yourself.

Especially as an educator.

This is a high-pressure game with a lot of moving parts, and a lot of collective misunderstanding. There is no misunderstanding what Kohl’s is, or Honda, or the American Cancer Society, or a library. But a school? What’s that, exactly? What’s a ‘good school‘? There’s very little confusion about whether a tree trimmer is succeeding, or a salesperson excelling. What about a teacher? Who gets to say you’re doing a good job? And above all of the formal metrics and growth plans and walk-throughs, when you go to bed at night, whose approval are you really looking for? What do you look for to let you know, deep in your own heart, that you’re doing this thing ‘right’?

And what happens if you’re not sure? Do you change what you’re looking for? Rationalize the mediocrity? Mute that voice? This internal conversation is part of what separates “a person doing their job” from “a human being doing good work.” This field can eat you alive. Think for a moment about how the best teachers are the ones that “learn to survive.” That’s a stunning indictment of where we are as an industry.

I guess my point is, take care of yourselves and the people around you. That might mean to buy each other chocolate or send one another inspiring quotes on pinterest, but that’s kind of simply coping, isn’t it? Just surviving? Sometimes that’s all you can do, but when that’s the tone of your day-to-day existence, you may want to think again.

We can do better. Maybe you help rethink and redesign and retool something that’s collectively unsustainable. That’s one way to describe the work I do here at TeachThought. It could mean taking steps in a new direction and doing something not from the spirit of retreat, but the unique momentum of your life. It could mean to humble yourself and really, truly serve others–to stop that inward-out thinking pattern that’s created so much suffering for you. Don’t be afraid to start over–to reinvent yourself on the shoulders of everything you’ve learned to this point.

There are many ways to be a teacher.

There may be a time where will and expertise and credibility and grit aren’t enough, and you’re vulnerable. What results could just be a bad day, or a lot of bad days. Or anxiety. Or depression. Or addiction. In spite of all of our growth as a culture and planet, mental health continues to be stigmatized. And so we whisper, or pretend, or stop listening to ourselves. I guess. I dunno. Some people may read this post and sympathetically think “Awww, good for you!” but what I’m trying to say is “No, good for you.” You’re beautiful and capable beyond your wildest dreams.

The adage ‘If you want to go fast, go alone; if you want to go far, go together’ is staggeringly, painfully true, no matter how hard it can be.  This doesn’t imply that you have to assimilate your thinking, or that other people should change theirs for you. It means being together matters. There is love around you, but you have to open yourself to it. Be light for others, but look for their glow as well.

You need it, and they need yours, like lightning bugs hanging in the purple ether.

What Happened When I Tried To Teach Alone; image attribution flickr user mikelewinski

Around 30,000 jobs may be on the line at universities – we have to fight back | Jo Grady | Education