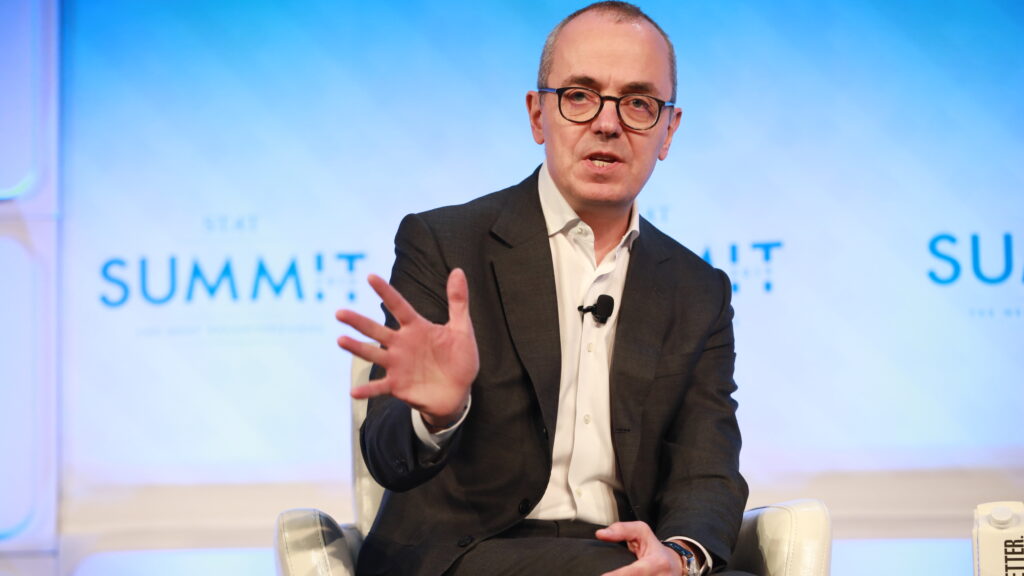 CAMBRIDGE, Mass. — In his first appearance since Bristol-Myers Squibb completed its takeover last week of Celgene (CELG), Giovanni Caforio offered a predictably upbeat prognosis for the newly combined company but sidestepped questions about rival Merck’s ongoing dominance of immunotherapy, a key area that has been tinged with disappointment for the poker-faced executive.

“I think we’re just at the beginning of a long journey. We’ve demonstrated immune-oncology  is extremely effective and changing the standard of care across a large number of tumors. … We are far from the end,” the Bristol-Myers chief executive officer told the crowd at the STAT Summit, an industry conference sponsored by STAT and held at MIT.

His remarks were made as a bulked-up Bristol-Myers will now attempt to blend the product portfolios and R&D machines that the two companies possess. At the same time, he will have to fend off increasingly intense competition in cancer treatments, which has been a franchise field for both companies. And for Bristol-Myers, its Opdivo and Yervoy drugs are bright spots that have often been eclipsed.

Yet Caforio deflected questions about Merck, which has used its Keytruda immunotherapy to transform its fortunes. Instead, he stuck to what sounded like tried-and-true talking points to tout the potential that the newly merged drug company offers, along with what he maintained is its financial flexibility. And he argued that both companies have a “long track record of success” in working with partners.

Indeed, the merger occurred as immunotherapies transformed the pharmaceutical industry and the hopes of patients. Caforio, however, faces a crucial challenge in trying to integrate operations and retain enough of the best employees to generate home-grown medications but also strike the right partnerships.

And in keeping with his new role as head of the pharmaceutical industry trade group PhRMA,  Caforio also took the opportunity to criticize health plans for the prescription drug pricing problem that has angered so many Americans. When asked for a fix, he turned to a familiar industry litany about problematic benefit designs and rebates that do not address premiums or out-of-pocket costs.

“From a science perspective, we have never made so much progress in so many diseases,” he explained. “But incentives are not aligned in the U.S. … You have a system where insurance is working upside down.”

Instead, Caforio pivoted by discussing value, an increasingly common term that has become something of a mantra in the pharmaceutical and insurance worlds. He rejected the idea that value can be established by relying on cost-effectiveness assessments, a metric that several European countries use to evaluate a medicine before agreeing to reimbursement.

He argued that this approach fails to take into account patient-reported outcomes for gauging the extent to which a treatment may be working. “I do support looking at data and do support looking at an analysis when looking at the value of a medicine,” he said. “But I think they are, in some cases, really not methodologically accurate. And they don’t look from the perspective of patients.”

Ironically, the Trump administration is considering using an approach, which it calls an international pricing index and would incorporate prices from some European countries that use cost-effectiveness to negotiate pricing. But Caforio did not address this point directly and instead expressed more general hesitation about some of the ideas emanating from Washington, without mentioning any one proposal.

“Industry would be extremely supportive of accelerating a constructive dialogue with the administration,” he insisted. “I am concerned about the some of the discussion happening in Washington. The (ideas) don’t do a lot for patients, may stifle innovation, and would be concerning at a time when industry is making so much progress.”