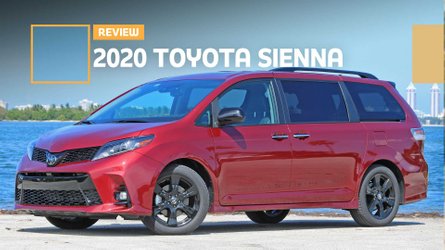 With its last redesign dating back to the 2011 model year, the 2020 Toyota Sienna is among the oldest minivans on sale today. Only the Dodge Grand Caravan, which traces its roots back to the previous decade, has more gray hairs on its proverbial head.

Predictably, the Sienna feels its age from the driver’s seat, and its chassis regularly shudders over road irregularities while its infotainment screen lacks the size and ergonomics to properly compete with the likes of Chrysler’s UConnect system. Toyota’s done its best to keep its minivan relevant, though, and the Sienna includes the segment’s most powerful V6 engine, a class-exclusive all-wheel-drive option, and a bevy of – standard – advanced safety features. Still, there’s no denying the current Sienna feels a bit burnt next to its newer competition.

The Sienna’s interior is rather utilitarian. Marked by hard plastics, large climate controls, a plethora of storage nooks, and as many as 12 cup holders, the van’s insides reflect its mission as a multi-purpose vehicle. Whereas Toyota blesses its Sienna SE and SE Premium models with more aggressive exterior styling, the two trims’ interiors largely mirror those of other Sienna models. Save for white gauges, the sportiest Siennas share the same tall dashboard, three-spoke steering wheel, and dash-mounted gear selector with its stablemates.

People carrying is the Sienna’s modus operandi, and it manages this feat by offering seating for up to eight individuals on front-wheel-drive models (all-wheel-drive Siennas make do with seven seats thanks to a pair of second-row captain’s chairs, a feature that’s also available on front-drive L, LE, Limited, and Limited Premium models). Specific to SE and SE Premium trims are first- and second-row seats with perforated leather trim (XLE, XLE Premium, Limited, and Limited Premium models include leather sans perforation). The heated, power-operated front chairs are long-haul comfortable, although the slightly off-center steering column makes the Sienna’s driving position a bit awkward.

Likewise, the 40/20/40-split second row’s outboard seats offer adequate accommodations for those of most shapes and sizes. The center-position seat, though, is less amenable and adults are better off avoiding it. At least it’s removable and stows in a compartment in the cargo area, which subsequently leaves the second row’s two outboard seats to serve as captain’s chairs.

The Sienna’s third-row bench is also appropriately comfortable for three, and it features adequate leg and shoulder room for carrying full-size adults about town. Still, the rearmost row remains better suited for those of smaller stature if embarking on a long road trip.

With all seats in place, the Sienna affords a best-in-class 39.1 cubic feet of space. Fold the 60/40-split rear bench into its well and that figure increases to 87.1 cubes. Unlike the Chrysler Voyager and Pacifica or Dodge Grand Caravan, the Sienna’s second-row seats fail to fold into the floor. Instead, the chairs push up against the front seatbacks to allow 117.8 cubic feet of space. However, manually removing the mid-row raises that sum to a class-topping 150.0 cubes, or 9.5 and 9.7 cubic feet better than that of its Chrysler and Dodge competitors.

If you’re planning on hauling items more often than people, then it’s hard to argue with the Sienna’s available cargo space. That said, the ability of the Chryslers and Dodge to quickly switch from people carrier to cargo hauler is a major benefit for consumers who regularly use their minivans for both family and work activities.

No matter the trim, every Sienna boasts a 3.5-liter V6 under its stubby hood. With 296 horsepower, the Sienna’s engine is the most powerful in the segment. It’s also the only minivan available with all-wheel drive – a $1,505 option on SE and SE Premium trims (all-wheel drive adds $2,540 to LE, $2,430 on XLE and XLE Premium, and $1,360 Limited and Limited Premium models). Forgo all-wheel-drive, as this test vehicle does, and the Sienna instead sends its power exclusively to the front wheels.

An eight-speed automatic transmission is the sole gearbox on offer and makes the most of the V6 engine’s peaky powerband (peak power comes at 6,600 rpm) thanks to its short first gear, quick responses, and reasonably smooth shifts. In short, the front-drive Sienna never wants for power. Likewise, the van’s pleasantly firm, short-stroke brake pedal provides plenty of confidence when coming to a stop.

Complementing the Sienna SE and SE Premium models’ more dynamic looks are trim-specific coil springs for the van’s twist-beam rear axle. The suspension alterations work with the trims’ 19-inch wheel and tire combination to noticeably firm up the ride and exacerbate the flimsy feel of the chassis.

Despite its stiffer ride, the Sienna SE Premium’s dynamics remain decidedly minivan-like. A tall seating position provides a commanding view of the road, while also amplifying body motions. Meanwhile, the Sienna’s light, overboosted steering makes it easy to maneuver at low speeds. The tiller’s limited heft in turns, however, limits driver confidence through more twisting tarmac or banked highway on- and off-ramps. Unless you can’t live without the looks of the Sienna SE and SE Premium models, then you’re probably better off opting for one of the Toyota minivan’s other trim levels.

Like others in the segment, the entry-level Sienna L is rather low on family-friendly technology. To nab power-operated sliding doors, you’ll need to move up to the LE trim. Want a power-operated rear hatch? Step up to the SE.

While all Siennas come standard with a 4.2-inch display in the gauge cluster and a dashboard-mounted 7.0-inch touchscreen infotainment system that’s Apple CarPlay compatible, only LE and higher trims include a WiFi hotspot. Likewise, an in-dash navigation system and an in-car microphone that allows the driver and front-passenger to speak to those in the third-row without raising their voices are available on SE and XLE models. Both features are standard on SE Premium, XLE Premium, Limited, and Limited Premium trims. All Premium models include a rear-seat entertainment system with a 16.4-inch screen.

Despite its long list of available tech features, the Sienna’s infotainment system’s user interface desperately needs improvement. With a faraway placement from the driver’s seat and only 7.0 inches of screen space, the system asks the driver to reach uncomfortably far to interact with its too-small on-screen buttons and rather messy looking menus. Tech-savvy shoppers ought to consider the Chrysler Pacifica’s setup, which offers an ergonomically superior 8.4-inch screen.

With fuel economy ratings by the Environmental Protection Agency of 19 miles per gallon in the city, 26 mpg on the highway, and 21 mpg combined, the Sienna’s combined fuel economy is down a single mpg to those of the Chrysler Voyager and Pacifica and the Honda Odyssey. Adding all-wheel-drive lowers the Sienna’s figures to 18 mpg city, 24 mpg highway, and 20 mpg combined.

With a base price of $31,565, the Sienna’s cost of entry is higher than those of the Chrysler Voyager, Dodge Grand Caravan, Honda Odyssey, and Kia Sedona. Admittedly, not a single competitor’s entry-level model offers the same array of active safety features as the Sienna does.

Getting into the sportier Sienna SE requires spending $37,715, while stepping up to the loaded SE Premium raises the bottom line to $43,810. The more expensive model nets standard kit such as a proximity key with push-button start, a sunroof, rear parking sensors, and a rear-seat entertainment system. Save for the latter feature, all of the SE Premium’s content is optionally available on the SE, including our tester’s $700 Midnight Edition package. Tack on $1,120 in destination and this Sienna SE Premium totals in at $45,630, making it more expensive than a similarly equipped Chrysler Pacifica Touring L and Kia Sedona SX by $2,720 and $1,360, respectively.

How Much Does A Ferrari Actually Cost?

AMG Vehicle Subscription Service Will Cost You $3,595 Per Month