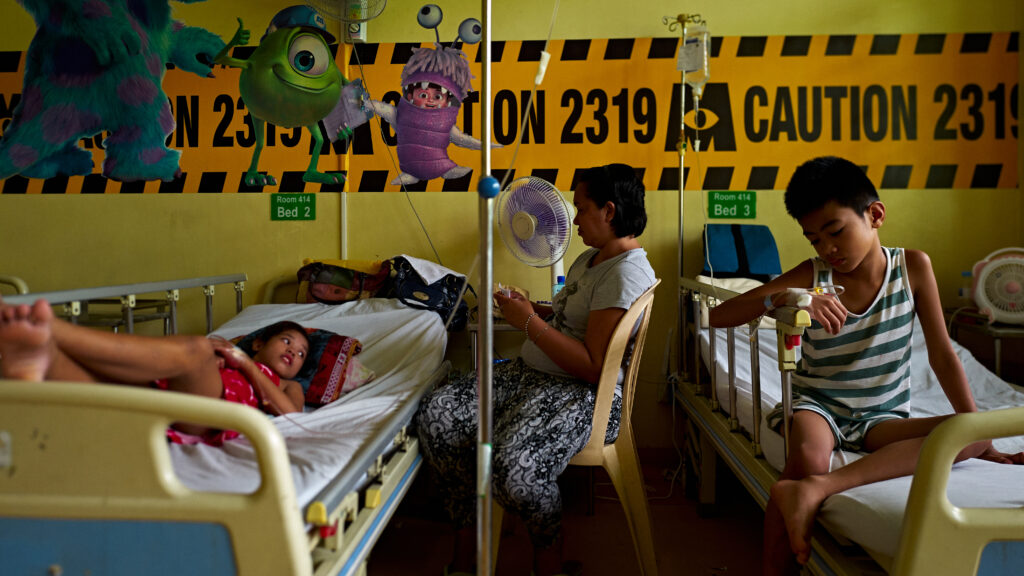 New data about the effectiveness of Takeda (TAK) Pharmaceutical’s experimental dengue vaccine will likely raise more concerns among the many people hoping the vaccine will be an effective and safe tool with which to combat the massive global burden of dengue fever.

The company — which earlier this month published findings from a Phase 3 trial outlining responses to the vaccine after 12 months — presented 18-month data at the annual meeting of the American Society of Tropical Medicine and Hygiene in National Harbor, Md.

A year and a half after receiving two doses, the vaccine appeared to be about 73% effective at preventing any dengue infections in vaccinated children. That figure was down from 80% after 12 months. It also reduced the risk of hospitalization for dengue by 90%, down from 95% in the 12-month analysis.

The reduction in hospitalizations was both in children who had had a bout of dengue before they were vaccinated and children who had never been infected, so-called sero-negatives. That’s important: The only licensed dengue vaccine, Sanofi’s Dengvaxia, cannot be given to children who’ve never been infected with dengue because it appears to increase their risk of developing serious illness if they subsequently contract one of the four types of dengue viruses.

But under the aggregate positive message there are data points that appear less promising. One in particular relates to how well the vaccine works against dengue 3 viruses. (It is most effective against dengue 2 and dengue 1 viruses, preventing 95% and 70% of those infections respectively.)

The dengue 3 component seems to be both less effective and the protection it generated appeared to wane in the interval between the 12-month and 18-month analyses.

(There was too little dengue 4 circulating in the eight countries where the Phase 3 trial took place to be able to assess how well the vaccine works against it yet.)

More troubling about the dengue 3 component was the fact that it did not appear to protect the children who were sero-negative when they were first vaccinated.

The number of infections caused by dengue 3 among the vaccinated children is still small and longer follow up is needed, Wallace said. “But it’s a clear trend and it suggests a lack of efficacy against dengue 3,” he told STAT in an interview. “We’ll have to look at the evolution of data over time.”

Dr. Anna Durbin, a vaccine researcher from Johns Hopkins who has not worked on the Takeda vaccine, said she thought the lack of protection against dengue 3 viruses in children who were naïve to dengue at the time of vaccination was worrying.

“They should be concerned about the lack of efficacy of [dengue 3] in sero-negatives,” said Durbin, who has been involved in testing an as-yet unlicensed dengue vaccine being developed at the National Institute of Allergy and Infectious Diseases. She also noted the protection that sero-positive children got from the dengue 3 component seemed to wane in the interval between the 12- and 18-month analyses.

A crucial question to answer is whether this apparent lack of efficacy of the dengue 3 component in sero-negative children increases their risk of developing severe dengue if they become infected with the virus.

“It will be important to see if we see that increase in fever leading to increase in hospitalization or increase in severe disease,” Wallace said.

Dengue is a complex disease and experts have long worried that developing a vaccine that could safely protect against all four serotypes could be very difficult.

Transmitted by Aedes aegypti mosquitoes, dengue causes a painful infection nicknamed break-bone fever. It’s estimated that nearly 400 million people a year are infected with dengue, which is found in much of Asia, Africa, and Latin America.

A small portion of people who contract the disease develop a severe form, known as dengue hemorrhagic fever, which can be fatal. It’s estimated that about 500,000 people develop severe dengue each year and about 22,000 die.

An oddity of dengue infections is the source of concern about whether a safe dengue vaccine could be made. Not only does infection with one strain not protect against the others, it actually appears to increase the risk the infected person will go on to have severe case of dengue with a second infection.

That was not seen initially in the clinical trials that were used to support Sanofi’s application for licensure of Dengvaxia. But over time signs started to emerge that children who were sero-negative when vaccinated were hospitalized with dengue at higher rates than children who were vaccinated after having had dengue at least once.

In late 2017 Sanofi (SNY) reported that it appeared the effect was real. The Philippines, the first country to roll out the vaccine broadly, suspended its use and later revoked the vaccine’s license.

The World Health Organization’s Scientific Advisory Group of Experts on Immunization recommended the vaccine be given only to children who were sero-positive for dengue — problematic for Sanofi because no point-of-care test currently exists to determine if children can safely be vaccinated.

When the Food and Drug Administration approved Dengvaxia in May, it was for a very narrow subset of Americans — children between the ages of 9 and 16 living in places where dengue is endemic and who have previously had a dengue infection. In the United States dengue is found only in Puerto Rico and a few other offshore territories and protectorates.

Wallace said Takeda is continuing to follow the nearly 20,000 children enrolled in its study; the company plans to gather data from the children for a total of four-and-a-half years after they received their second dose of the vaccine.

The company expects to make the study’s 24-month data public some time in the first half of 2020 and has been told by regulators they are open to the company submitting an application for licensure based on the two-year data in the second half of the year.

COVID-19 Drug Testing: Where We Stand