Give Thanks For Adult Siblings And The Ties That Bind : Shots 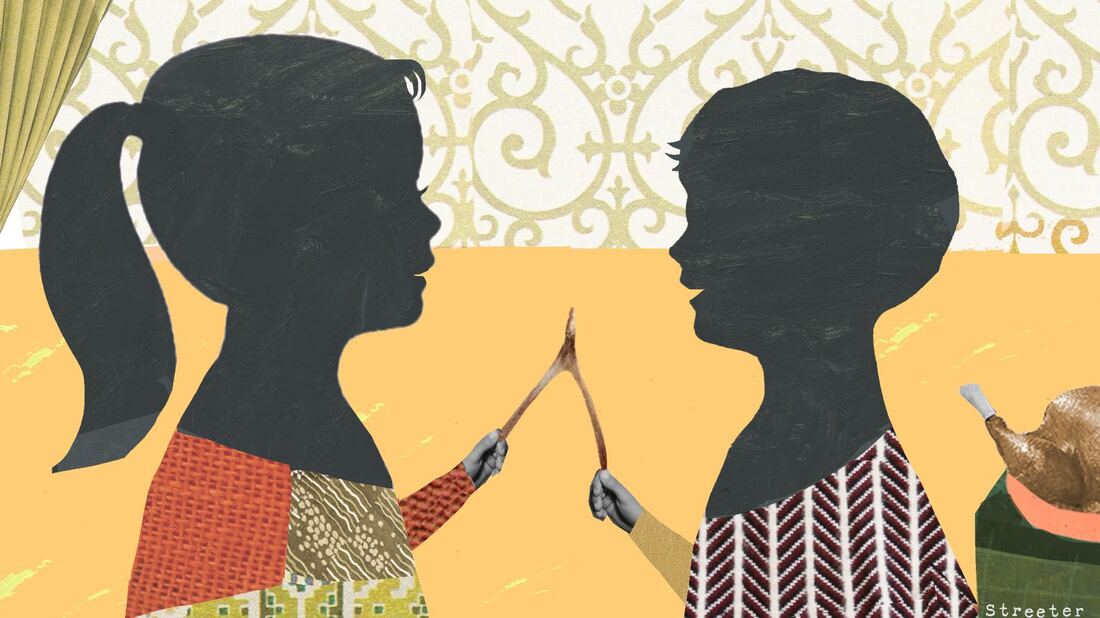 We’re tethered to our brothers and sisters as adults far longer than we are as children; our sibling relationships, in fact, are the longest-lasting family ties we have. 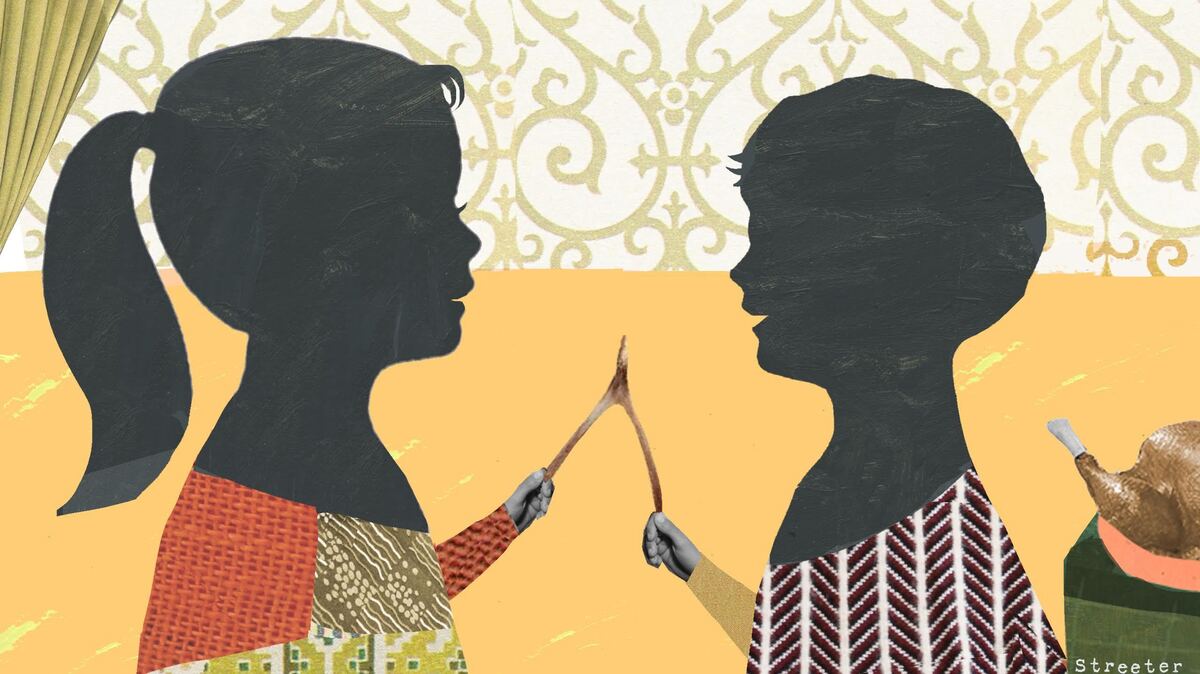 We’re tethered to our brothers and sisters as adults far longer than we are as children; our sibling relationships, in fact, are the longest-lasting family ties we have.

We didn’t expect to need the card table for spillover seating at this year’s Thanksgiving dinner. We would be fewer than usual, just nine altogether, and the littlest one’s high chair needs no place setting.

As we got things ready, I felt deep gratitude for the family members who would be here — my husband, our two daughters, their husbands, my sister-in-law’s 90-year-old mother and our two delightful granddaughters. But I also knew I would deeply miss the ones who couldn’t make it.

This would be our third holiday without my mother, who died in March 2017. My niece and nephews had other plans, and so did my younger brother, Paul, who was traveling in Spain with his wife.

During middle age and old age, indicators of well-being — mood, health, morale, stress, depression, loneliness, life satisfaction — are tied to how you feel about your brothers and sisters.

I was glad they had a chance to see a part of the world they’d never been to, but I was sad to hear they would break the 18-year-old tradition of crowding into our overheated apartment for turkey and cranberry nut bread. I knew I would miss Paul, and not just because he’s a thoughtful, entertaining guy (who also, conveniently, usually brings the appetizers).

I would miss him because glancing across the Thanksgiving table into his blue eyes, which look exactly like mine, always makes me feel grounded. Though we’re very different, he’s the one, in a way, I know best.

Paul and I irritated each other when we were kids. I would take bites out of his precisely made sandwiches in just the spot I knew he didn’t want me to, and he would hang around the living room telling jokes when he knew I wanted to be alone with the boy on the couch.

But as adults, my brother and I have always had each other’s backs, especially when it came to dealing with our mother’s health crises, which became more frequent in her final years. Paul was the first person I wanted to talk to when something worried me about Mom; I knew he’d be worried too. He was the one I called when Mom, then 92, didn’t answer her phone one chilly Saturday morning; he was the one who made some further calls and learned she had died in her sleep.

There’s probably a biological explanation for the intensity of the sibling bond. Siblings share half their genes, which evolutionary biologists say should be motivation enough for mutual devotion. “I would lay down my life,” British biologist J.B.S. Haldane once said, applying the arithmetic of kin selection, “for two brothers or eight cousins.” Siblings are a crucial part of a child’s development too, teaching one another socialization skills and the rules of dominance and hierarchy, all part of the eternal struggle for parental resources.

When psychologists study siblings, they usually study children, emphasizing sibling rivalry and the fact that brothers and sisters refine their social maneuvering skills on one another. The adult sibling relationship has only sporadically been the subject of attention. Yet we’re tethered to our brothers and sisters as adults far longer than we are as children; our sibling relationships, in fact, are the longest-lasting family ties we have.

One thing that can scuttle closeness in adulthood is a parent who played favorites in childhood; this sense of resentment can last a lifetime.

Most such relationships are close — two-thirds of people in one large study said a brother or sister was one of their best friends. One thing that can scuttle closeness in adulthood is a parent who played favorites in childhood; this sense of resentment can last a lifetime.

A study by Jill Suitor, a sociologist at Purdue University, and her colleagues polled 274 families with 708 adult children (ages 23 to 68) in 2009 and found that the majority had good feelings toward their siblings. Most didn’t remember much favoritism from when they were kids, but those who did reported feeling less loved and cared for by their siblings. It didn’t matter whether they felt themselves to be the favored or the unfavored child. The simple perception of parental favoritism was enough to undermine their relationship.

That’s one thing Paul and I have going for us: Our parents treated us pretty much the same when we were growing up, despite our different skills and personalities. Paul is gregarious while I’m shy, funny while I’m not, a terrific amateur saxophonist while I can’t read music or carry a tune. This isn’t unusual. In families with more than one child, every sibling seems to get a label in contrast to every other sibling.

Because of the particular intensity of sibling relationships, conflict cuts to the bone. People grieve for the frayed ties to their siblings as though they’ve lost a piece of themselves.

So if your kid sister is the queen bee in any social gathering, you might get labeled “the quiet one” even if you’re not especially quiet, just quiet in comparison. And if you’re a bright child who always gets good grades, you might not get much credit for that if your big brother is a brilliant child with straight A’s. There’s room for only one “smart one” per family — you’ll have to come up with something else. (I was smart, but Paul was smarter; I ended up being “the good one.”)

The very presence of siblings in the household can be an education. When a new baby is born, wrote Purdue psychologist Victor Cicirelli in the 1995 book Sibling Relationships Across the Life Span, “the older sibling gains in social skills in interacting with the younger,” and “the younger sibling gains cognitively by imitating the older.”

They learn from the friction between them too, as they fight for their parents’ attention. Mild conflict between brothers and sisters teaches them how to interact with peers, co-workers and friends for the rest of their lives.

The benefits can carry into old age. The literature on sibling relationships shows that during middle age and old age, indicators of well-being — mood, health, morale, stress, depression, loneliness, life satisfaction — are tied to how you feel about your brothers and sisters.

In one Swedish study, satisfaction with sibling contact in one’s 80s was closely correlated with health and positive mood — more so than was satisfaction with friendships or relationships with adult children. And loneliness was eased for older people in a supportive relationship with their siblings, no matter whether they gave or got support.

That’s why it’s so sad when things between siblings fall apart. This often happens when aging parents need care or die — old feelings of rivalry, jealousy and grief erupt all over again, masked as petty fights ostensibly over who takes Mom to the doctor or who calls the nursing home about Dad.

Many families get through parents’ illnesses just fine, establishing networks where the workload is divided pretty much equally. Paul and I did fine, too, throughout our mother’s progressive frailty and forgetfulness, and we also had no problem splitting the chores that arose in the aftermath of her death. But about 40% of the time, according to one study, there is a single primary caregiver who feels like she (and it’s almost always a she) is not getting any help from her brothers and sisters, which can lead to serious conflict.

And because of the particular intensity of sibling relationships, such conflict cuts to the bone. People grieve for the frayed ties to their siblings as though they’ve lost a piece of themselves.

Throughout adulthood, the sibling relationship “is powerful and never static,” said Jane Mersky Leder, author of The Sibling Connection. Whether we are close to our siblings or distant, she writes, they remain our brothers and sisters — for better or for worse.

So let this all percolate as you sit down to turkey with your sometimes-complicated family. And remember the immortal words of folk singer Loudon Wainwright III in a song called “Thanksgiving.“ It’s about spending the holiday with a brother and a sister whom he rarely sees but still has intense feelings about:

On this auspicious occasion, this special family dinner

If I argue with a loved one, Lord, please make me the winner.

Maybe my brother sensed my anticipatory sadness from across the Atlantic; maybe he was feeling sad at his end, too, about missing the festivities. At the last minute, Paul and his wife caught an early flight home — they will be with us for Thanksgiving after all. And as I get ready to pull out the card table that we suddenly need, I find myself feeling incredibly lucky.

Science writer Robin Marantz Henig is a contributing writer for The New York Times Magazine and the author of nine books. This is an updated version of an article that we originally published on Nov. 27, 2014.

Restarting America Means People Will Die. So When Do We Do It?

Can I Go For A Jog? Is Grocery Shopping Too Risky> : Goats and Soda : NPR