Black Mothers Get Less Treatment For Their Postpartum Depression : Shots 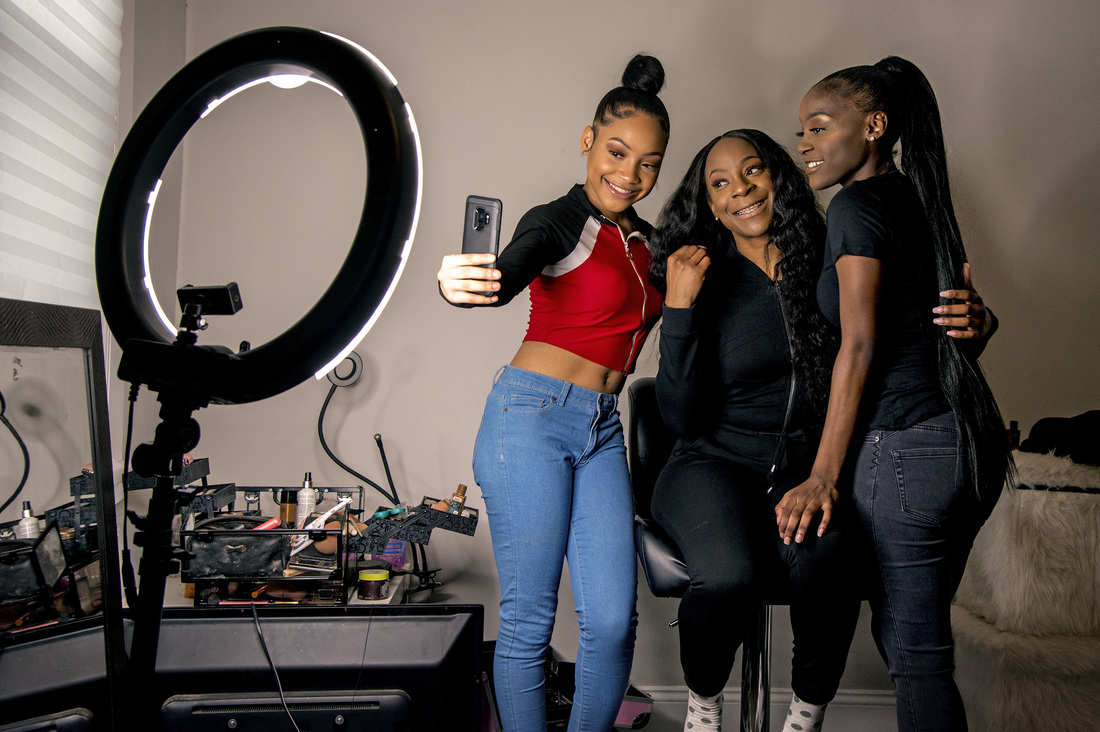 Years ago, Portia Smith (center) suffered postpartum depression and feared seeking care because of child welfare involvement. She and her daughters Shanell Smith (right), 19, and Najai Jones Smith (left), 15, pose for a selfie after makeup artist Najai madeup everyone as they were getting ready at home on Feb. 6, 2019, to go to a movie together. 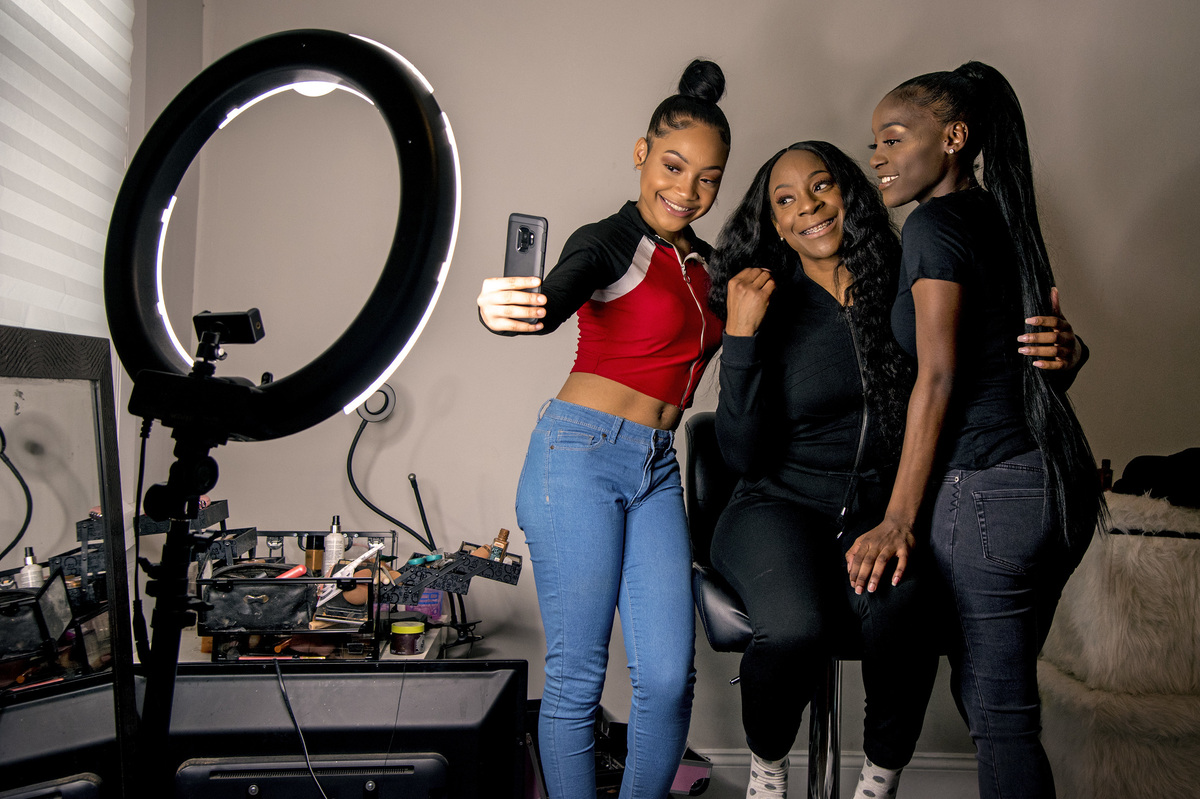 Years ago, Portia Smith (center) suffered postpartum depression and feared seeking care because of child welfare involvement. She and her daughters Shanell Smith (right), 19, and Najai Jones Smith (left), 15, pose for a selfie after makeup artist Najai madeup everyone as they were getting ready at home on Feb. 6, 2019, to go to a movie together.

Portia Smith’s most vivid memories of her daughter’s first year are of tears. Not the baby’s. Her own.

“I would just hold her and cry all day,” Smith recalls.

At 18, Smith was caring for two children, 4-year-old Kelaiah and newborn Nelly, with little help from her abusive relationship. The circumstances were difficult, but she knew the tears were more than that.

“I really didn’t have a connection for her,” says Smith, now a 36-year-old motivational speaker and mother of three living in Philadelphia. “I didn’t even want to breastfeed because I didn’t want that closeness with her.”

The emotions were overwhelming, but Smith couldn’t bring herself to ask for help.

“You’re afraid to say it because you think the next step is to take your children away from you,” she says. “You’re young and you’re African-American so it’s like [people are thinking] ‘she’s going to be a bad mom.'”

Smith’s concern was echoed by several women of color interviewed for this story. Maternal health experts say women often choose to struggle on their own rather than seek care and risk having their families torn apart by child welfare services.

But those advances help only if women in need are identified in the first place — a particular challenge for women of color and low-income moms, as they are several times more likely to suffer from postpartum mental illness, but less likely to receive treatment.

The consequences of untreated postpartum depression can be serious. A report from nine maternal mortality review committees in the United States found that mental health problems, ranging from depression to substance use or trauma, went unidentified in many cases and were a contributing factor in pregnancy-related deaths. Although rare, deaths of new moms by suicide have also been reported across the country.

Babies can suffer too, struggling to form a secure attachment with their mothers and becoming more likely to develop behavioral issues and have lower cognitive abilities.

‘I was lying to you’

For many women of color, the fear of child welfare services comes from seeing real incidents in their community, says Ayesha Uqdah, a community health worker who conducts home visits for pregnant and postpartum women in Philadelphia through the nonprofit Maternity Care Coalition.

News reports in several states and studies at the national level have found child welfare workers deem black mothers unfit at a higher rate than white mothers, even when controlling for factors like education and poverty.

During home visits, Uqdah asks clients the 10 questions on the Edinburgh Postnatal Depression Scale survey, one of the most commonly used tools to identify women at risk. The survey asks women to rate things like how often they’ve laughed or had trouble sleeping in the past week. The answers are tallied for a score out of 30, and anyone who scores above a 10 is referred for a formal clinical assessment. 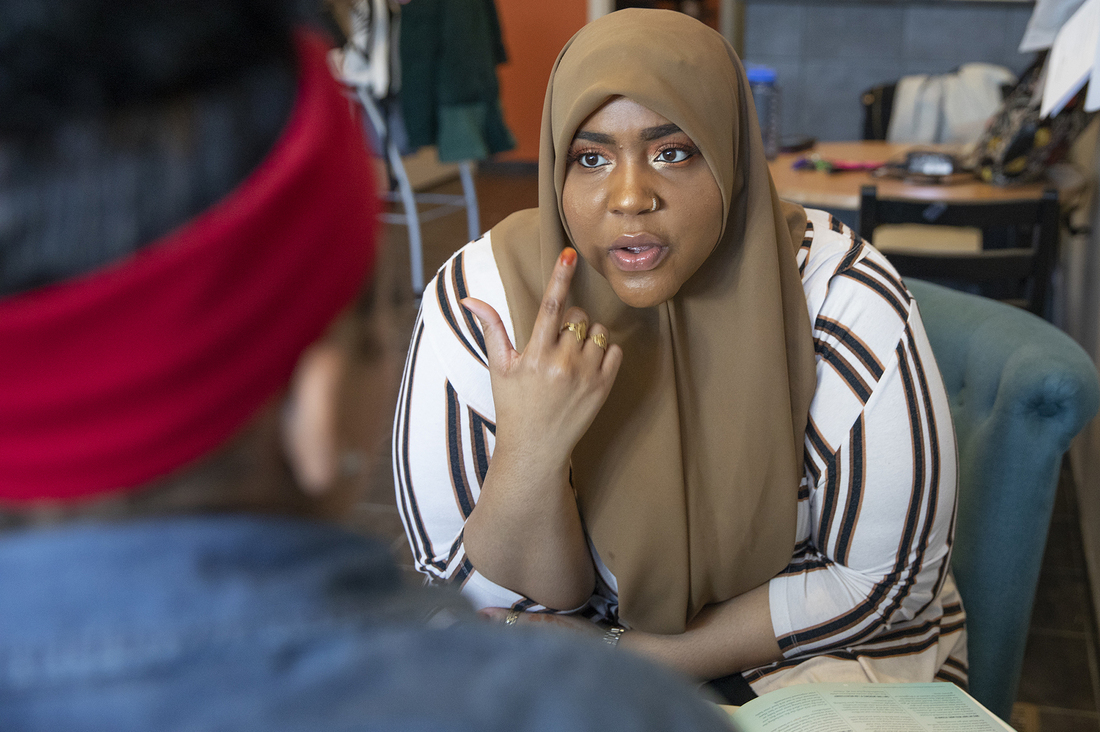 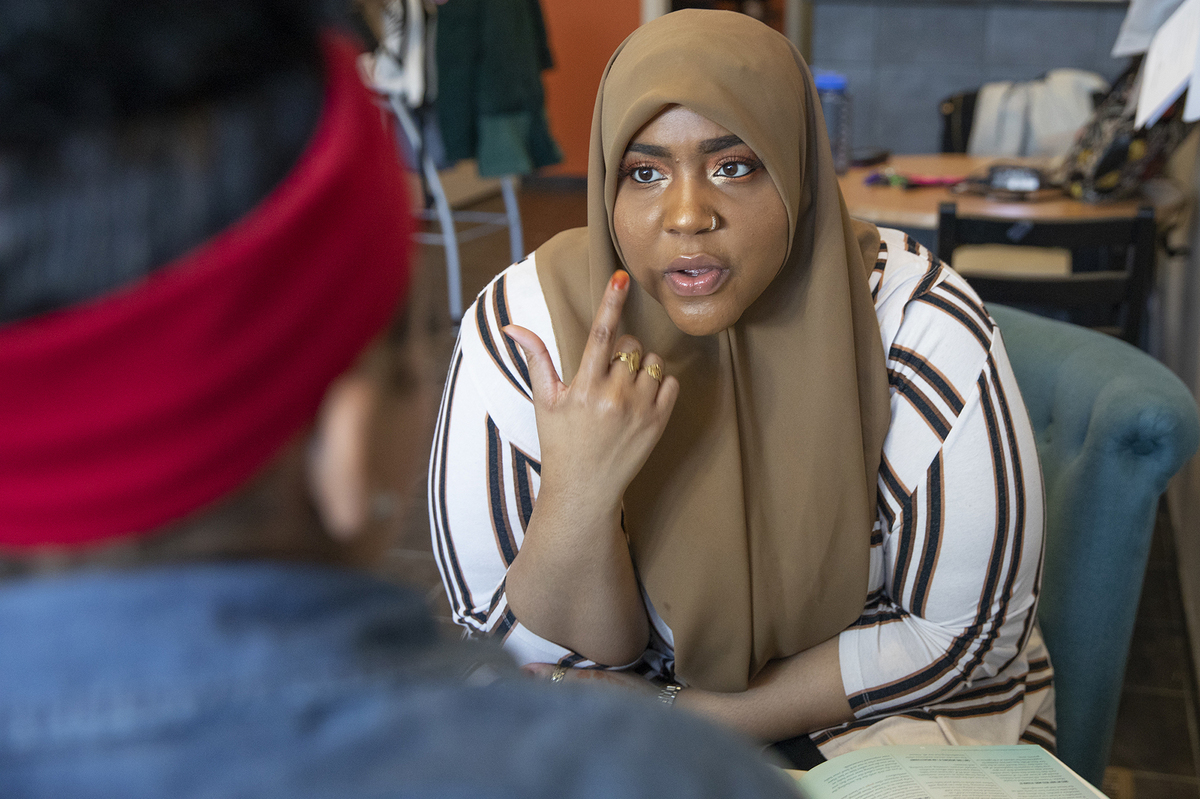 Uqdah remembers conducting the survey with one pregnant client, who scored a 22. The woman decided not to go for the mental-health services Uqdah recommended.

A week after having her baby, the same woman’s answers netted her a score of zero: perfect mental health.

“I knew there was something going on,” Uqdah says. “But our job isn’t to push our clients to do something they’re not comfortable doing.”

About a month later, the woman broke down and told Uqdah, “I was lying to you. I really did need services, but I didn’t want to admit it to you or myself.”

The woman’s first child had been taken into child welfare custody and ended up with her grandfather, Uqdah says. The young mother didn’t want that to happen again.

Screening tools are not one-size-fits-all

Another hurdle for women of color comes from the tools clinicians use to screen for postpartum depression.

The tools were developed based on mostly white research participants, says Alfiee Breland-Noble, an associate professor of psychiatry at Georgetown University Medical Center. Often those screening tools are less relevant for women of color.

Research shows that different cultures talk about mental illness in different ways. African-Americans are less likely to use the term “depression,” but may say they don’t feel like themselves, Breland-Noble says.

It’s also more common for people in minority communities to experience mental illness as physical symptoms. Depression can show up as headaches, for example, or anxiety as gastrointestinal issues.

Studies evaluating screening tools used with low-income, African-American mothers found they don’t catch as many women as they should. Researchers recommend lower cutoff scores for women of color, because women who need help may not be scoring high enough to trigger a follow-up under current guidelines.

It took Portia Smith six months after her daughter Nelly’s birth to work up the courage to see a doctor about her postpartum depression.

Even then, she encountered the typical barriers faced by new moms: Therapy is expensive, wait times are long, and coordinating transportation and child care can be difficult, especially for someone struggling with depression.

But Smith was determined. She visited two different clinics until she found a good fit. After several months of therapy and medication, she began feeling better. Today, Smith and her three daughters go to weekly $5 movies and do their makeup together before each major outing.

But many moms never receive care. A recent study from the Children’s Hospital of Philadelphia found that only one in 10 women who screened positive for postpartum depression at the hospital’s urban medical practice sites sought any kind of treatment in the following six months. A study examining three years’ worth of New Jersey Medicaid claims found white women were nearly twice as likely to receive treatment as women of color.

Noticing that gap, the Maternity Care Coalition in Philadelphia decided to try something new.

In 2018, the nonprofit started a pilot program that pairs mothers with Drexel University graduate students training to be marriage and family counselors. The student counselors visit the women an hour a week and provide free in-home counseling for as many weeks as the women need. Last year the program served 30 clients. This year, the organization plans to expand the program to multiple counties in the region, and hire professional therapists.

It was a gamechanger for Stephanie Lee, a 39-year-old woman who had postpartum depression after the birth of her second child in 2017.

“It was so rough, like I was a mess, I was crying,” Lee says. “I just felt like nobody understood me.”

She felt shame asking for help, and thought it made her look weak. Lee’s mother had already helped her raise her older son when Lee was a teenager, and many members of her family had raised multiple kids close in age. 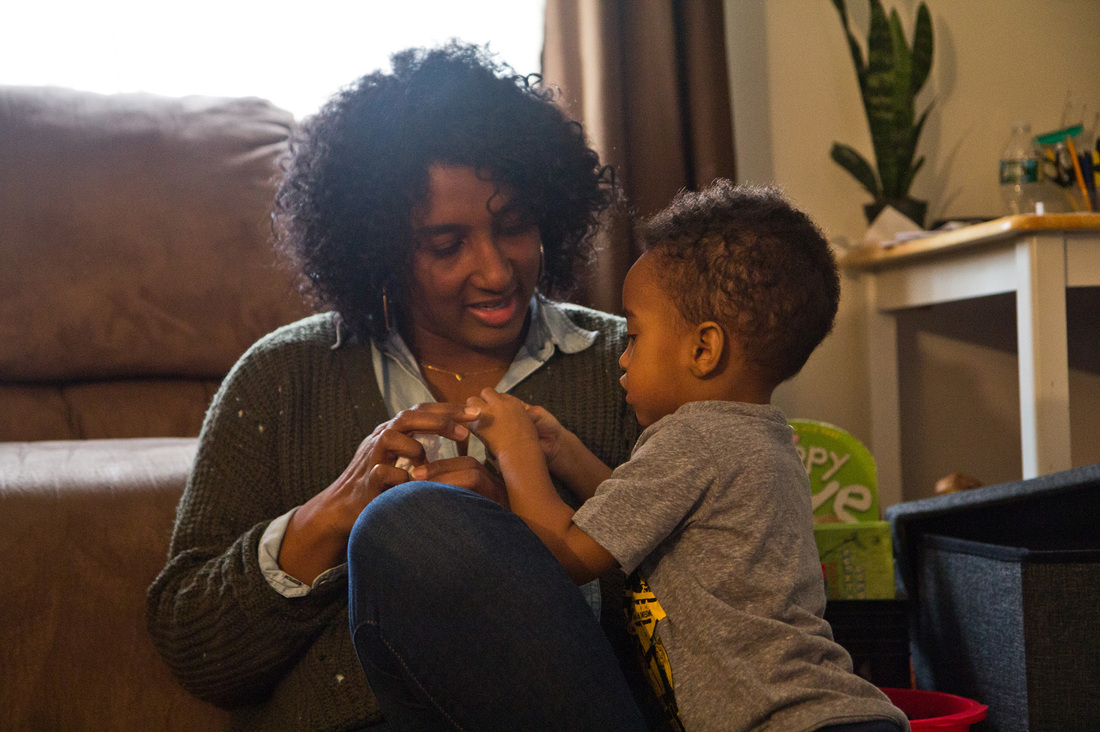 Stephanie Lee remembers the period after her son Santeno Adams, 2, was born. 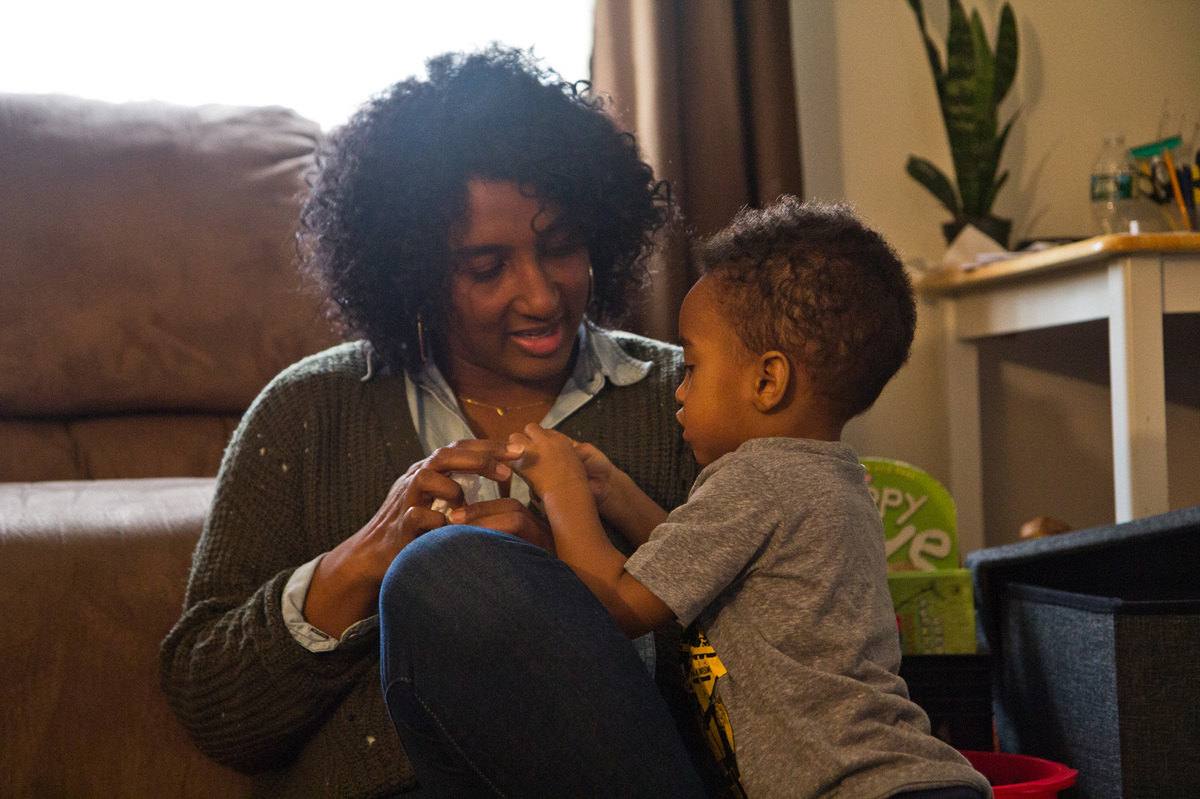 Stephanie Lee remembers the period after her son Santeno Adams, 2, was born.

“The black community don’t know postpartum,” Lee says. “There’s this expectation on us as women of color that we have to be these superhero strong, that we’re not allowed to be vulnerable.”

But with in-home therapy, no one had to know Lee was seeking treatment.

The counselors helped Lee get back to work and learn how to make time for herself — even just a few minutes in the morning to say a prayer or do some positive affirmations.

“If this is the only time I have,” Lee says, “from the time I get the shower, the time to do my hair, quiet time to myself — use it. Just use it.”

This story was reported as a partnership between The Philadelphia Inquirer, for which Aneri Pattani reports, and WHYY. You can read the original version here.

A Son In Wuhan Wants A Moment Alone With His Father's Remains. The Government Says No