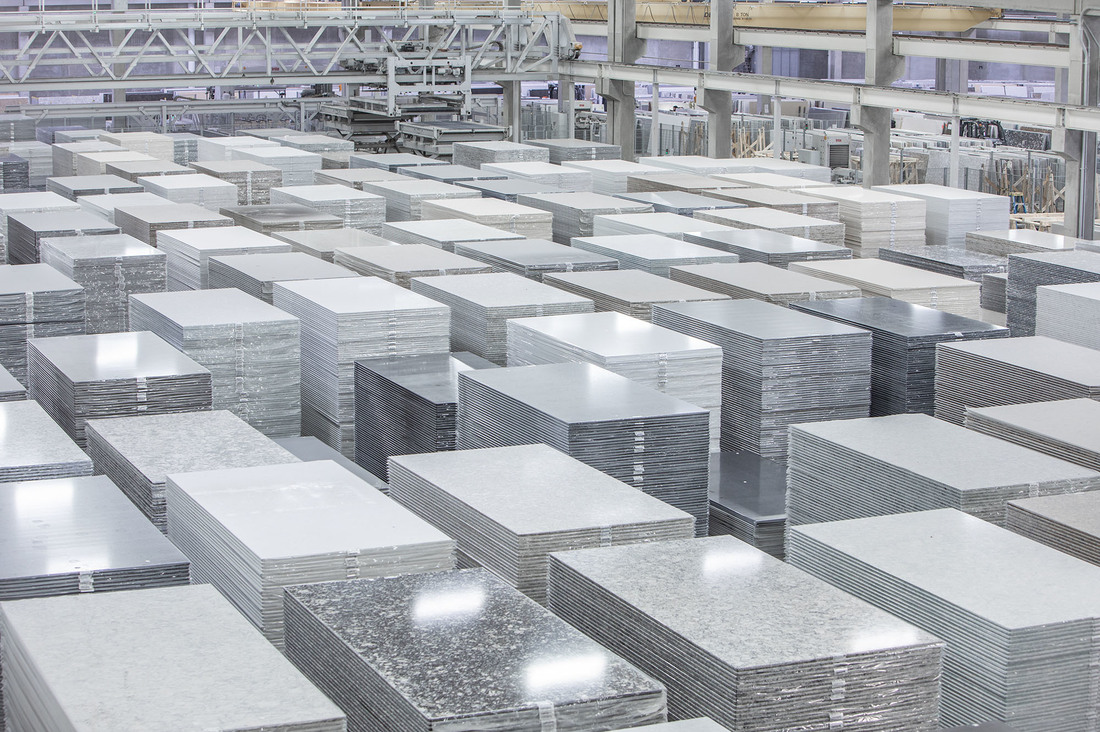 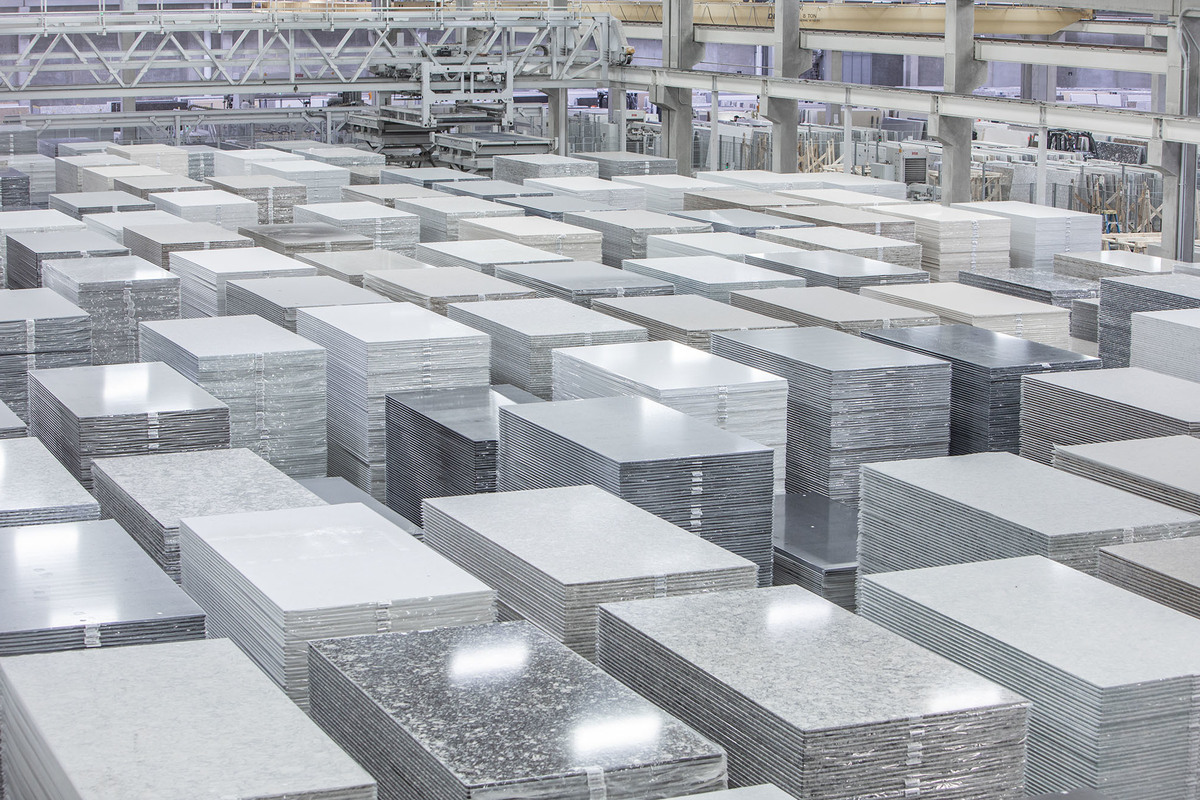 Every day, 20 to 30 trucks roll into a factory in Minnesota. They’re filled with quartz — some of it like a powder, and some of it like sparkling little pebbles, in big white sacks.

“It’s about 30 million pounds of quartz a month,” says Marty Davis, the CEO of Cambria, a company that manufactures material for kitchen and bathroom countertops. “About a million pounds a day.”

All of this quartz gets transformed into a kind of engineered stone that looks like granite and marble, but with more durability and stain-resistance. Quartz countertops have really taken off over the past decade, and factories around the world are churning out slabs of the stuff under different brand names.

Natural granite contains silica too, but all of the quartz that goes into engineered stone means that it contains about twice as much.

So far, 19 countertop workers in the U.S. are known to have developed severe lung disease after cutting engineered stone along with other stone; two of them died of their illness, and others have been told they will eventually require lung transplants.

Manufacturers such as Cambria say that their slabs of composite stone are completely safe when cut and polished with the proper precautions.

“There’s clear regulation and clear guidance and governance on how to process materials safely to control dust and respiratory inhalation of dust,” Davis says.

He invited NPR to tour his factory. Above the entrance is a sign that says: “Through these doors walk the finest countertop makers in the world.”

Cambria produces around 30,000 slabs of quartz countertop material every month, says Davis, who adds that the company has also spent millions of dollars on air-handling systems to control dust.

“There’s no good dust. Zero,” says Davis, who gained an appreciation of safe manufacturing practices while working in his family’s dairy business. 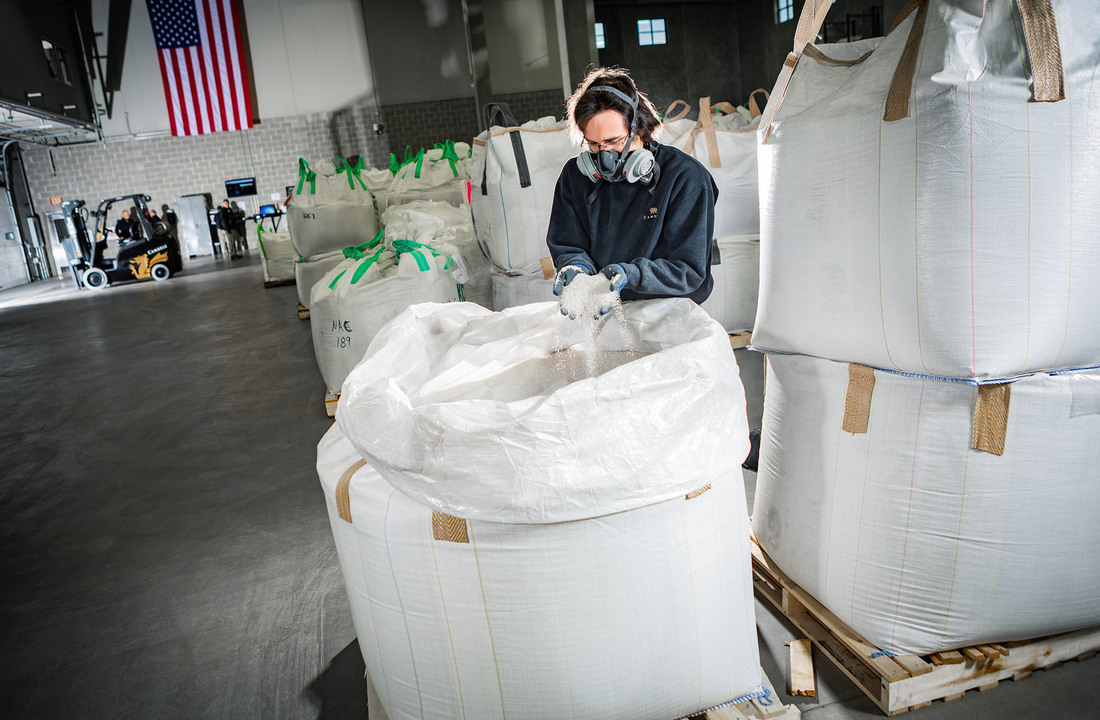 Cambria receives raw quartz that is then combined with a binder and pigments to produce engineered quartz slabs, which are then sent out to workshops around the country. 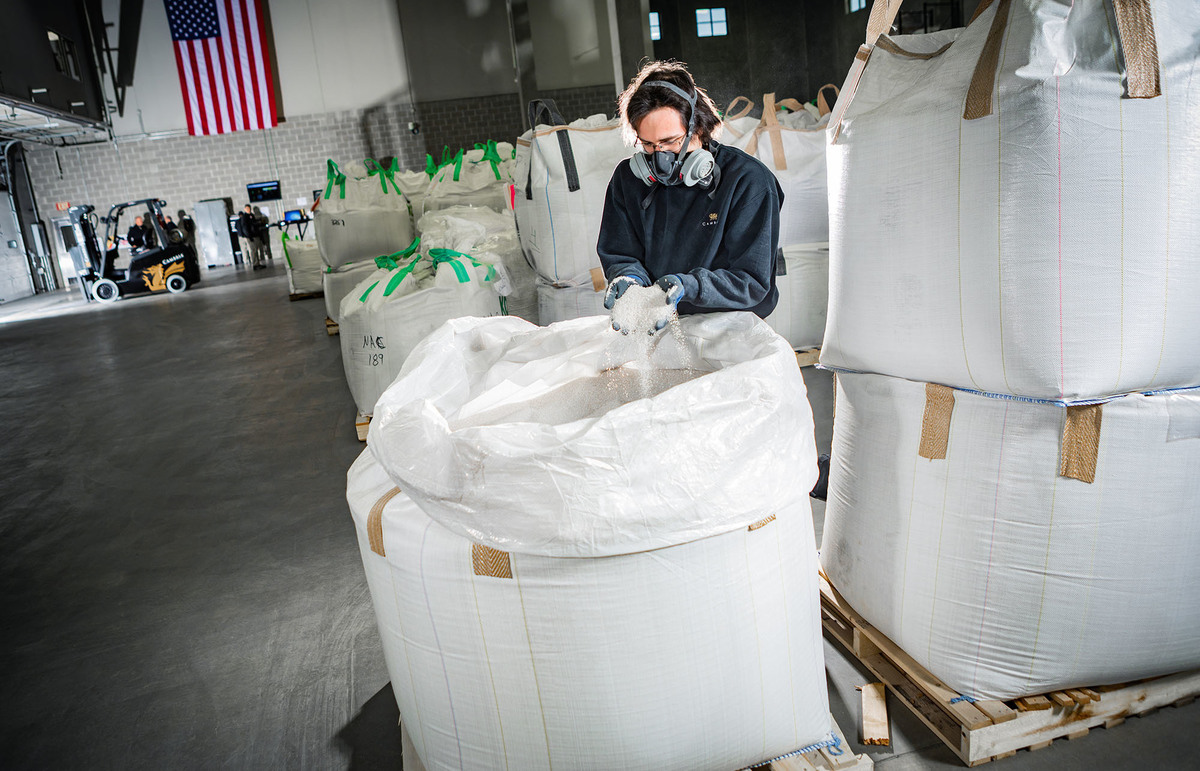 Cambria receives raw quartz that is then combined with a binder and pigments to produce engineered quartz slabs, which are then sent out to workshops around the country.

A sign warns of silica at the door to a huge room filled with mechanical mixers. There, workers wear respirators as they combine quartz, pigments and a binder. The mixture gets spread out onto what looks like a giant baking sheet, then goes through a machine that vibrates the material in a vacuum to remove any voids.

This produces a soft, compressed slab that feels almost like cookie dough. It hardens when it gets heated, then cooled and polished. The factory is filled with rows of finished slabs in different colors, ready to be sent out to countertop makers.

Davis says these slabs go out to thousands of workshops, and he can’t follow his product to each one.

“How do you police your customers?” he says, noting that the dangers of silica have been known for decades. “There are many products that we make in our world that, if processed or consumed improperly, are dangerous.”

He says the Occupational Safety and Health Administration (OSHA) has clear rules on controlling worker exposure to silica. “If you follow and adhere, your employees will be safe,” Davis says.

His company’s own countertop fabrication shops prove this, he says. In addition to manufacturing slabs, Cambria runs a network of five shops that cut slabs to order.

“They’re clean as a whistle,” says Davis, adding that one of his own sons works in the shops.

In these workshops, and at the main factory, Cambria uses devices to do real-time monitoring of silica dust — something that Davis says goes above and beyond what is currently typical for the industry.

But some workers in countertop shops run by other companies say they weren’t protected from silica.

Juan (who didn’t want to use his last name because of medical privacy) says he had a job making countertops in Washington state, and a lot of what he cut was quartz.

For the first couple of years, his workplace practiced dry cutting — that means no spray of water to keep the dust down. There was so much dust, he says, he couldn’t see someone working 20 feet away.

Juan, who is now 38, says he wore a simple face mask that didn’t provide enough protection and that no one told him about silica, or the danger.

“At first you don’t feel the changes a lot,” Juan said in Spanish, speaking through an interpreter. “Then later, with time passing, your body starts telling you that you’re missing air, that you’re suffocating and you’re tired.”

In 2016, after four years at the shop, he developed a cough that wouldn’t go away, no matter what medicine he took. About a year later, a friend who was a chiropractor advised him to get his lungs tested.

At first, his doctor told him it wasn’t necessary. “Then when he did the tests, the doctor almost cried. He said, ‘I’m sorry, you’re right, your lungs are very damaged,’ ” says Juan, who has a wife and three children.

He says he can’t carry groceries and gets exhausted just walking from his house to his car. He’s being evaluated for a lung transplant.

“After this happened, they made lots of changes in the company,” Juan says. “Now they don’t cut like they used to. They bought a lot of machines and the machines do most of the work.”

Dry cutting methods generally are cheaper because they do not require specialized equipment or water recycling systems. One survey of countertop shops in 2012 found that the majority reported using dry methods all or most of the time in at least one fabrication step.

Margaret Phillips, an occupational health expert at the University of Oklahoma Hudson College of Public Health in Oklahoma City, has done silica sampling in shops to assess worker exposures. 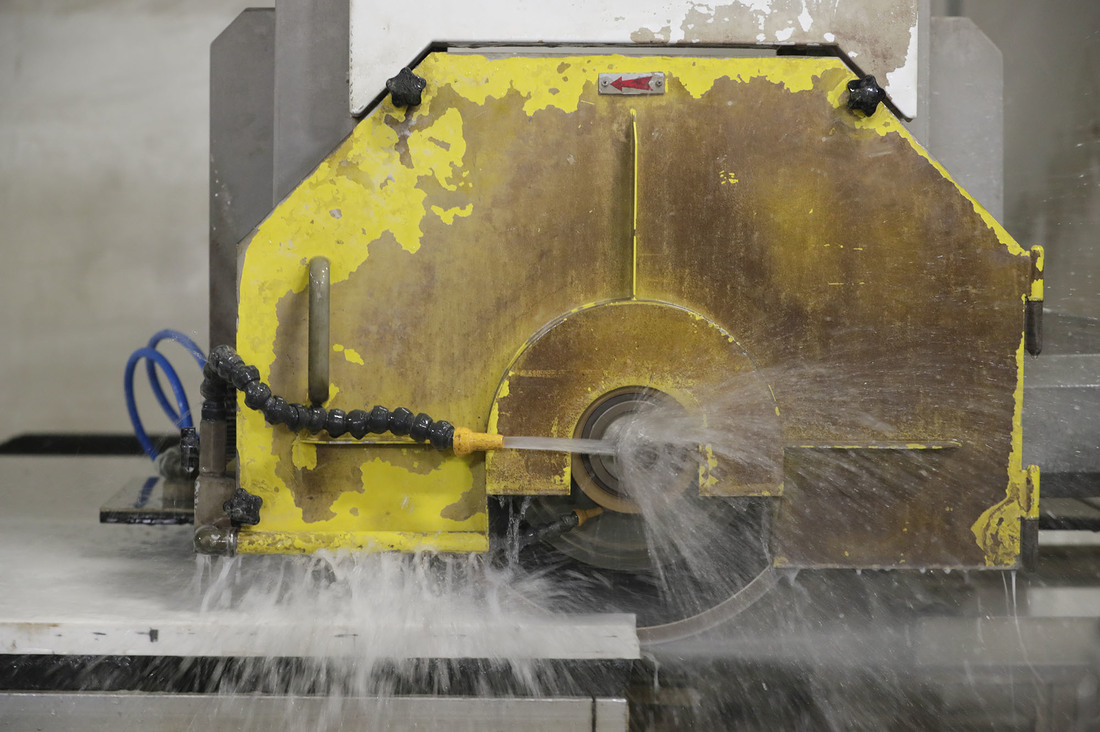 Water applied to cutting equipment, like this computer-operated saw, is one method to control silica dust exposure when cutting quartz slabs. 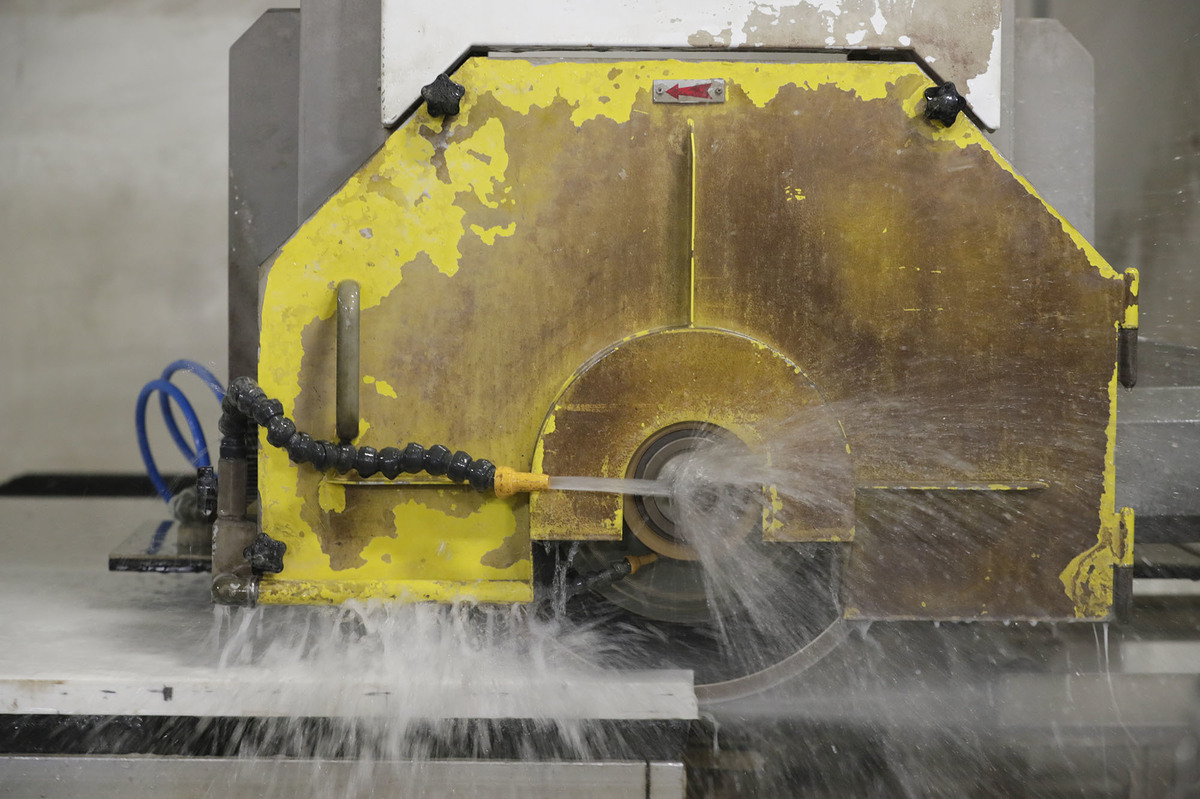 Water applied to cutting equipment, like this computer-operated saw, is one method to control silica dust exposure when cutting quartz slabs.

“If workers were doing mostly dry fabrication, so they were grinding, polishing, cutting, without any use of water on their tool to suppress the dust, then exposures tended to be very high,” Phillips says. “Like 20 times over the current OSHA limit, maybe even 40 times, or more. Dry fabrication is exposing workers to very, very high levels of silica dust.”

Some shops don’t do dry cutting, like Capitol Granite near Richmond, Va. There, big computer-controlled machines cut through slabs while dumping up to 35 gallons of water a minute on the blade to keep down the silica dust.

“We do not do any dry work whatsoever. That’s the only way that you can eliminate any risk affiliated with silicosis in the shop,” says owner Paul Menninger.

He says if it were up to him, dry cutting would be illegal.

In his workplace, machine operators and workers doing touch-ups with handheld tools don’t have to wear respirators, because silica is well controlled. Menninger knows this because he recently invited in an inspector from OSHA, who tested the air.

But he says there’s a lot of shops, especially smaller operations, that government inspectors never get to. And the stone cutting industry is unlicensed.

“It’s not like plumbing or electrical or HVAC or any of the other trades,” he says, “whereby there seems to be a standard or an international code.”

Yet consumers rely on the industry and regulators to ensure that products are made safely, says Carolyn Levine, a Washington resident who recently replaced her natural granite countertops with engineered quartz.

The lung illnesses found in the countertop industry are alarming, she says.

“Having regulations and precautions is important, and this is a good example of why,” Levine says.

She had never heard of engineered quartz before deciding to replace her old granite countertops, which she had for more than 12 years.

“I just wanted something lighter and brighter,” Levine says. “I had two guys give me estimates.”

They both were emphatic, she says, that compared to granite, the superior product was quartz.

Here’s What We Know As Of Friday : Goats and Soda : NPR

U.S. Says It Will Evacuate Americans From Cruise Ship

In Age of COVID-19, Hong Kong Innovates To Test And Quarantine Thousands