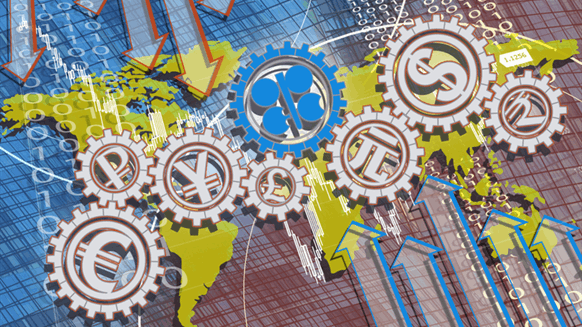 Oil rebounded from the biggest weekly loss since October as Iraq signaled OPEC+ will consider deeper output cuts at its meeting this week.

(Bloomberg) — Oil rebounded from the biggest weekly loss since October as Iraq signaled OPEC+ will consider deeper output cuts at its meeting this week, contrary to expectations, and China’s economy showed signs of improvement.

Futures surged as much as 1.9% in New York after plunging 5.1% on Friday amid indications OPEC+ won’t make steeper supply reductions. However, Iraq’s Oil Minister Thamir Ghadhan told reporters on Sunday there could be an additional cut of about 400,000 barrels a day. A gauge of China’s manufacturing sector jumped unexpectedly in November, suggesting a recovery in activity.

Oil capped a second monthly gain in November on signs Beijing and Washington are close to an initial trade deal, even after the U.S. passed legislation expressing support for Hong Kong protesters. Saudi Arabia will probably indicate to the the Organization of Petroleum Exporting Countries and its allies at the meeting in Vienna that it’s no longer willing to compensate for other members’ non-compliance, according to people familiar.

“Barring any dramatic developments, the emphasis will be likely be on further tightening the market through better compliance enforcement,” RBC Capital Markets analysts led by Helima Croft wrote in a note dated Dec. 1. But all is not well in the OPEC+ union as the price gains garnered from the production-cut agreement haven’t been enough to stave off serious social unrest in the more challenged members, they wrote.

West Texas Intermediate for January delivery rose 80 cents to $55.97 a barrel on the New York Mercantile Exchange as of 7:07 a.m. London time. Prices closed at $55.17 on Friday. There was no settlement Thursday due to the holiday in the U.S. and all transactions were booked on Friday.

Brent for February settlement advanced 77 cents, or 1.2%, to $61.19 a barrel on London’s ICE Futures Europe Exchange. The January contract expired Friday after dropping 2.3%. The global benchmark crude traded at a $5.27 premium to WTI for the same month.

Contrary to the comments from Iraq’s oil minister, the Organization of Petroleum Exporting Countries and its allies have sent signals that they’ll stick with existing output cuts at their meeting. Even if the group doesn’t need to go beyond its existing output curbs, data suggests it will at least need to prolong the supply deal past its current end-March expiry.

China’s official manufacturing purchasing managers’ index rose to 50.2, according to data released by the National Bureau of Statistics on Saturday. That’s the first reading above 50 since April, indicating an expansion in output. The surprise improvement offers a glimmer of hope that the world’s second-largest economy may be able to hold in check its slide toward sub-6% growth.

McDermott Unit Wins Saudi Contracts Worth Up to $350MM  | Rigzone