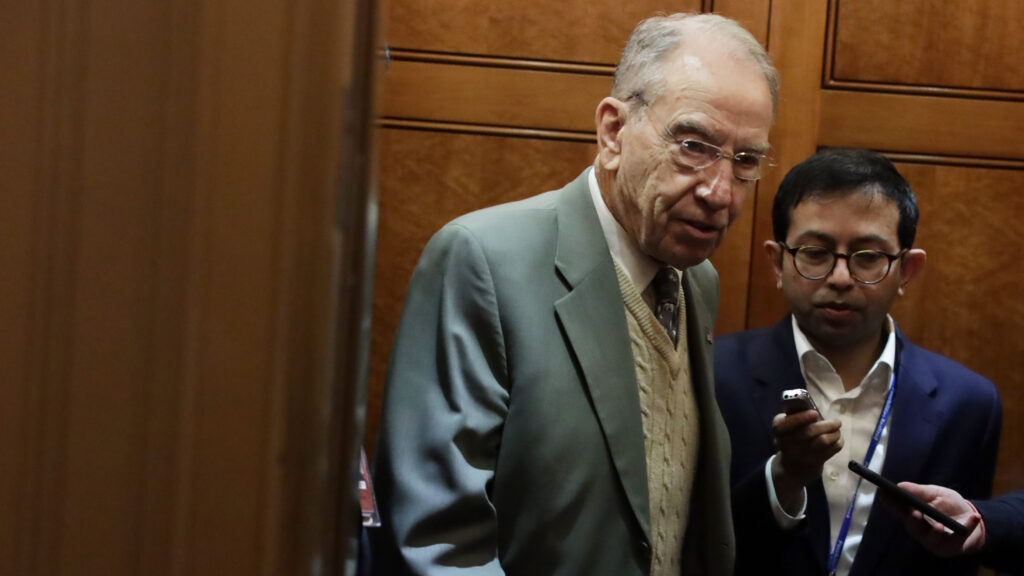 WASHINGTON — Leaders of a key Senate committee unveiled a new version of a sweeping, bipartisan drug pricing bill Friday, and they’ve devised a novel plan to get it signed into law.

The bill hasn’t changed much from the version that was narrowly passed out of the Senate Finance Committee in July — though a handful of tweaks offer further benefits to seniors. Since then, however, the bill’s political prospects have grown brighter, particularly after key Trump administration officials endorsed it over a far more progressive proposal from House Speaker Nancy Pelosi.

Lawmakers have also devised a unique ploy to get the legislation, which has been stalled in the Senate, to the president’s desk: Using it to help offset the costs of a slew of health programs, many of which would otherwise close at the end of the year without a funding boost.

Broadly, the package would cap what seniors can pay out of pocket for drugs and penalize drug makers that hike their prices more than inflation. It would also rework the way the government splits up Medicare drug costs between the senior, insurers, drug makers and the government.

Friday’s unveiling comes as both Democrats and Republicans on Capitol Hill — as well as key White House staffers — ramp up their interest in passing drug pricing legislation before the end of the year. The House will vote on Pelosi’s proposal next week, but that bill, which would let Medicare negotiate the prices of some drugs, is fiercely opposed by Republicans and unlikely to get a vote in the Senate. House Republicans also unveiled their own drug pricing package in a closed-door meeting Friday morning, but that package is unlikely to gain House Democrats’ support.

It is up to Senate Majority Leader Mitch McConnell (R-Ky.) to decide whether to hold a vote on the Senate package. In a press statement Friday, the committee’s chairman Chuck Grassley (R-Iowa) all but dared McConnell to do so, albeit without naming him directly.

“Congress has the opportunity to deliver a real, concrete win for the American people,” Grassley said. “Now it just needs to show courage and finally act.”

“It should get a vote soon,” he added.

Staff for the Finance Committee emphasized Friday they hope coupling the drug pricing package with funding for the health programs — known as extenders — will help convince McConnell to hold a vote.

“This legislation also solves other problems of leadership’s, with all the extenders. So that should be helpful,” a Finance committee aide told STAT.

The drug pricing package and a slew of extender money, like three years’ worth of funding for the Temporary Assistance for Needy Families (TANF) program and four years’ worth of funding for Puerto Rico’s Medicaid program, will be introduced as one bill, with the roughly $100 billion in savings generated from the drug pricing bill being used to pay for the health programs, aides confirmed Friday.

The White House is ratcheting up the pressure on McConnell, too. In an op-ed Friday, Domestic Policy Council Director Joe Grogan and Council of Economic Advisers Acting Chairman Tomas Philipson emphasized that if the Senate passed the Finance package, Trump would sign it into law.

“It is within our grasp to provide a real win for Americans worried about the high price of prescription drugs — if Congress can get it across the finish line before the end of the year,” Grogan and Philipson wrote.

The long-awaited text of the Finance package remained largely unchanged since the bill was passed by the committee in July.

Most of the changes are meant to make it even easier for seniors with high drug costs to afford their drugs. The new bill, for example, would allow seniors to pay their tab for medicines  over the course of a year, rather than being forced to pay immediately at the pharmacy counter.

It would also lower the percentage of drug costs seniors must pay after they meet their insurance deductible. Under the plan released Friday, seniors would be responsible for 20 percent of those costs, which is down from 25 percent under the plan passed in July.

There’s a small win tucked in there too for drug makers, too.

Under the newly released plan, drug makers, starting in 2022, will also be able to spread out their own Medicare bills, too. Instead of picking up 20 percent of a senior’s drug costs after seniors rack up $3100 in drug bills — during what is known as the catastrophic coverage phase —  they will now owe 14 percent. However, they will now also be responsible for paying 7 percent of a senior’s drug costs when they meet their deductible.

Committee staff explained that the change was meant to address concerns from small drug makers about huge liability in the catastrophic phase, but emphasized that drug makers writ large will end up owing the same amount they owed under the July proposal.

“We’ve heard from some companies that for certain drugs …, that if we have all of the liability in the catastrophic phase, it was basically an unfair penalty,” a committee aide told STAT.

Perhaps most notable, however, is what did not change in the package since it was narrowly passed in July: a hotly contested provision meant to prevent drug makers from increasing their prices each year by more than inflation. It’s still in.

In July, Republicans on the committee forced a 14-14 vote that narrowly failed to strip that provision out of the bill. Despite those long-held concerns, staff appeared intransigent Friday.

“It is critical, and essential, I cannot stress enough, that the inflation rebate in Part D remain in any final package,” a committee staffer told reporters.

This advocate wants mental health on the ballot in 2020

COVID-19 Drug Testing: Where We Stand

WHO to launch multinational trial to jumpstart search for coronavirus drugs