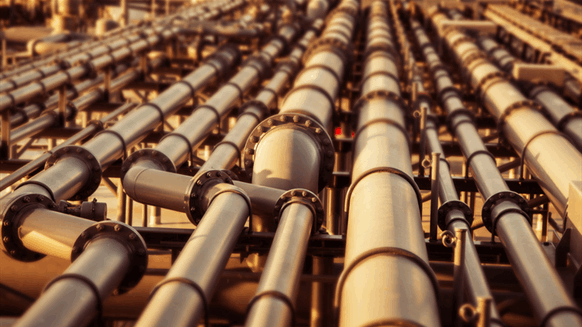 Five new oil pipelines are set to open in the Permian Basin through 2021, expanding a gap between production and takeaway capacity.

(Bloomberg) — It’s gone from a dearth to a glut of oil pipeline projects competing to serve slowing production growth in the Permian Basin.

Five new oil pipelines are set to open in the Permian Basin through 2021, expanding a gap between production and takeaway capacity that’s already forcing companies to cut fees and could mean lower profits and cutthroat competition ahead.

Producers in the West Texas and New Mexico oilfield are pumping about 4.72 million barrels a day, according to Rystad Energy AS. That compares with nearly 6 million barrels of pipeline capacity that could rise by about 3.5 million barrels in the next two years as planned new conduits come online.

Most of those planned projects were announced when the Permian was posting annual growth rates in excess of 1 million barrels a day. Now, some analysts see yearly growth slowing to as little as 650,000 barrels a day, with older wells producing less and oil companies preparing to curb spending this year to boost investor returns.

Competition will heat up particularly among pipeline companies seeking to renew long-term shipper contracts that are set to expire, including those seeking to proceed with new pipeline projects, said Sandy Fielden, director of research for Morningstar Inc. “There is a chance that some of the projects would get canceled or consolidated and that would depend on shipper commitment.”

Adding to this, the difference between the price of crude on the coast compared with Midland in the Permian has plummeted in the last year, making it more difficult for shippers to make money after paying the pipeline fees.

Oil producers are warning that they are preparing to curb spending this year to boost investor returns. “The Permian is definitely slowing down,” said Elisabeth Murphy, an analyst at ESAI Energy Llc. Declines from legacy wells are outstripping the new wells, and there aren’t enough rigs to offset the decline in the legacy wells, she said.

“New pipe start ups like Cactus II starting up and Epic in the summer have put us over the top on capacity,” said John Auers, executive vice president at energy consultant Turner Mason & Co. “Now, there is surplus capacity out of the Permian.”

For pipes still at proposal stage, it doesn’t help that the spread between Midland, Texas, and Houston which has access to export markets, has narrowed from over $10 a barrel a year ago to around $2.50. This would mean transportation costs from the Permian bound for the Gulf would have to be even cheaper, straining profit margins.

Ultimately, only projects initiated by companies with well established infrastructure will stand a chance to succeed, said Fielden. Connectivity on their existing systems would be plus points that will usher their projects through to completion, he added.

Still, some companies are forging ahead with pipeline expansions because of industry support. Enterprise Products Partners LP plans to push ahead with adding nearly 1 million barrels a day of new connectivity from Midland, Texas, to its ECHO terminal in southeast Texas, ready in 2021, according to Tony Chovanec, senior vice president for fundamentals and commodity risk assessment.

“It’s no surprise to anyone that next year and probably for the next couple of years, it’s going to be highly competitive, which will create volatility in earnings,” Magellan Chief Executive Officer Mike Mears said on the company’s earnings call in October.

–With assistance from Rachel Adams-Heard.

To contact the reporter on this story:
Sheela Tobben in New York at vtobben@bloomberg.net

To contact the editors responsible for this story:
David Marino at dmarino4@bloomberg.net
Mike Jeffers, Catherine Traywick

Microsoft to Invest $1B to Help Reduce Carbon Footprint  | Rigzone