Ferrari Shows What It Takes To Build The SF90 Stradale 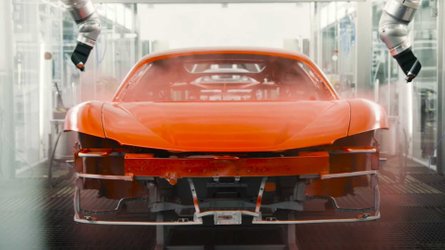 The SF90 could be the most important new Ferrari launched in the last decade. It’s not only the company’s first-ever plug-in hybrid model but also effectively the most powerful production car of the brand in its entire history. The hyper hybrid was sold out just days after its official debut and the supercar automaker is currently assembling the customer examples. Want to take a look behind the curtains and see how the SF90 is built? Today’s your lucky day.

A new 10-minute video released by Ferrari on its official YouTube channel shines more light over the processes of producing the hybrid supercar. It’s not a purely engineering video with people talking about the machines and robots used on the assembly lines but rather a short journey around the Maranello factory through beautifully shot footage. Trust us, it’s mesmerizing to watch. All three times.

“A journey in Maranello factory, where the most advanced production techniques and the most skilled artisans combine to produce the SF90 Stradale.”

Ferrari’s first PHEV uses a combination of a 4.0-liter V8 combustion engine and three electric motors – one for each of the front wheels and another one sandwiched between the ICE and the transmission. The system’s peak output is rated at 986 horsepower (735 kilowatts) and 590 pound-feet (800 Newton-meters), helping the SF90 Stradale to cover the 0-60 miles per hour (0-96 kilometers per hour) sprint in just 2.5 seconds. The top speed is 211 mph (340 kph).

Videos released by Ferrari last year detailed the hybrid powertrain of the supercar.