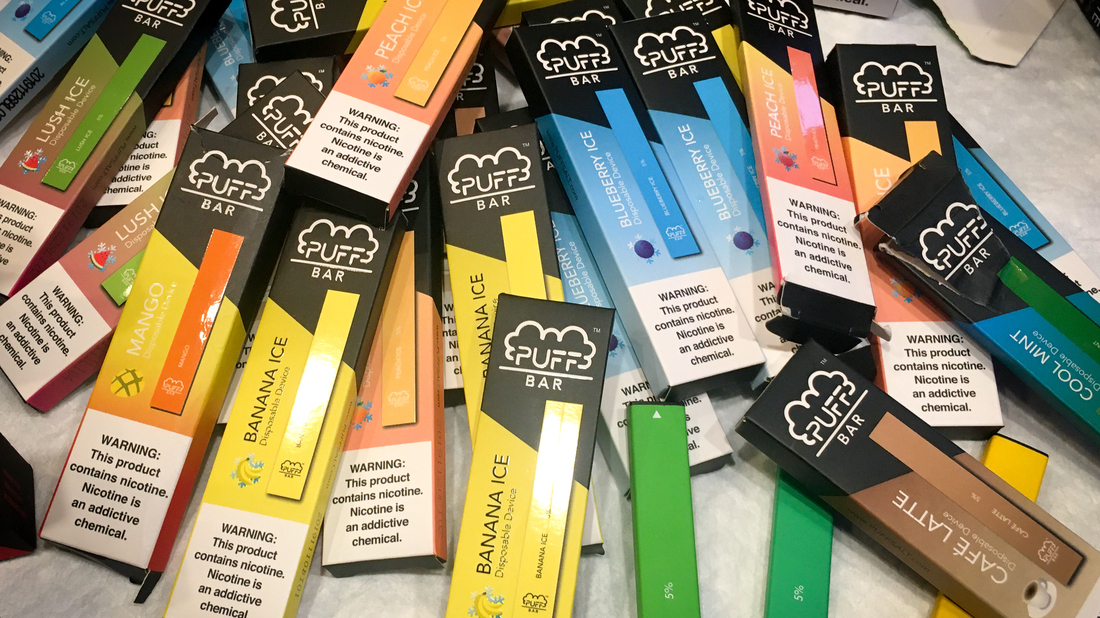 Disposable vapes may be hotter than Juul among kids, according to researcher Bonnie Halpern-Felsher. She received a bag of vape pens recently confiscated by a high school principal in northern California, with flavors like Banana Ice and Cool Mint. 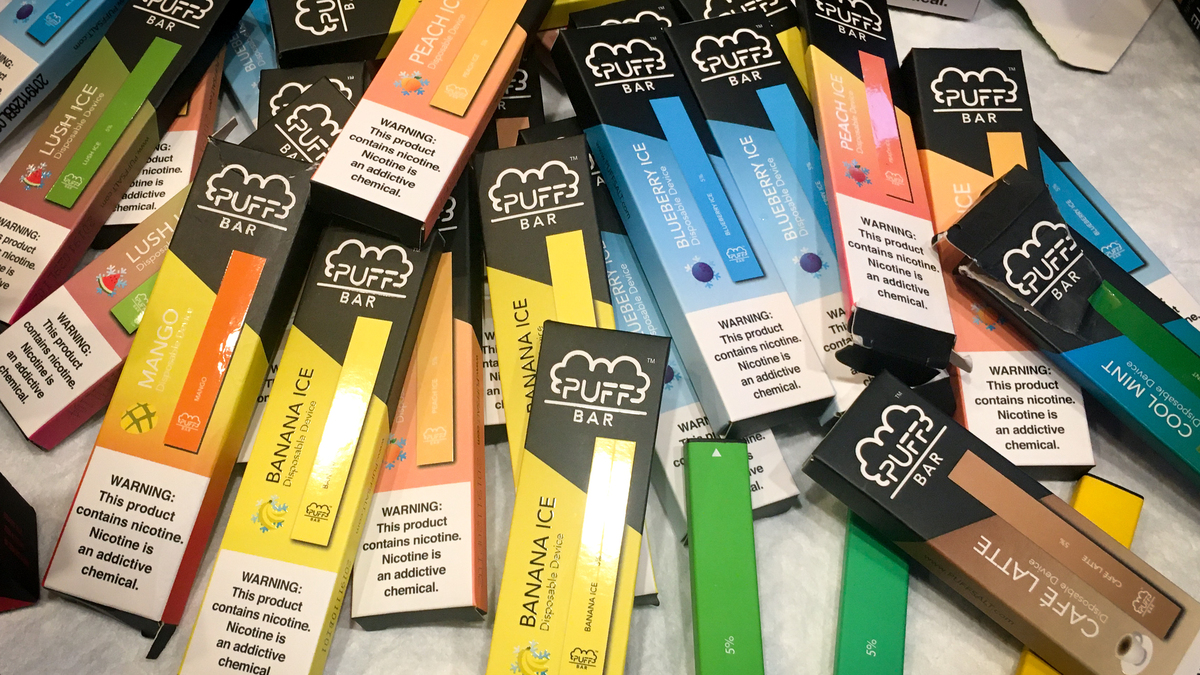 Disposable vapes may be hotter than Juul among kids, according to researcher Bonnie Halpern-Felsher. She received a bag of vape pens recently confiscated by a high school principal in northern California, with flavors like Banana Ice and Cool Mint.

Efforts to stem the tide of teen vaping seem to be a step behind the market. By the time Juul pulled most of its flavored pods from the market in October of 2019, many teens had already moved on to an array of newer, disposable vape products.

“Among the disposables [that] are most popular, there’s Puff Bar, there’s Stig, there’s Viigo,” Berkman says. They’re designed for one-time use. Then, they’re tossed, she explains. “These have just flooded the market,” Berkman says.

These products are flourishing despite the Trump administration’s partial ban on flavored e-cigarettes, announced in January and in effect as of Feb 5. The enforcement guidance issued by Food and Drug Administration was aimed at stopping young people from vaping. It focused enforcement on flavored cartridges, like Juul’s popular products.

But it left open some “loopholes,” says Matt Myers of the Campaign for Tobacco-Free Kids. “It won’t take the kids and it hasn’t taken the kids any time to make a switch [to newer products].”

At any time, the FDA could crack down on the new disposables. The agency has enforcement discretion to take action and in the guidance the agency specified it could take action on any e-cigarette product that’s “targeted to minors.”

The industry has been very creative at getting new products on the market quickly, despite regulators’ efforts to curb teen use, says Cristine Delnevo, who directs the Center for Tobacco Studies at Rutgers University.

“It’s a bit of a game of whack-a-mole, so when policies are aimed at one product, another product pops-up to fill the void,” Delnevo says.

Delnevo and her collaborators have documented some of the rapid changes in disposable vaping products in a new paper published recently in the journal Tobacco Control.

“There are so many of these products,” she says. She and her coauthors write that they heard anecdotally last September about a new vaping product, “a disposable ‘pod-mod’ closely resembling JUUL” that was popular among college students.

Combing through threads on Reddit, they found mention of a bunch of brands of disposable “pod-mods” — including Posh, Eon Stik and Mr. Vapor — which began to appear in the spring of 2019. “Comments focused on tasting similar to JUUL flavors, lasting longer than a JUUL pod and having a good ‘hit’ like a JUUL,” they wrote. They also documented advertising for two brands of disposable products in a convenience store near Rutgers. 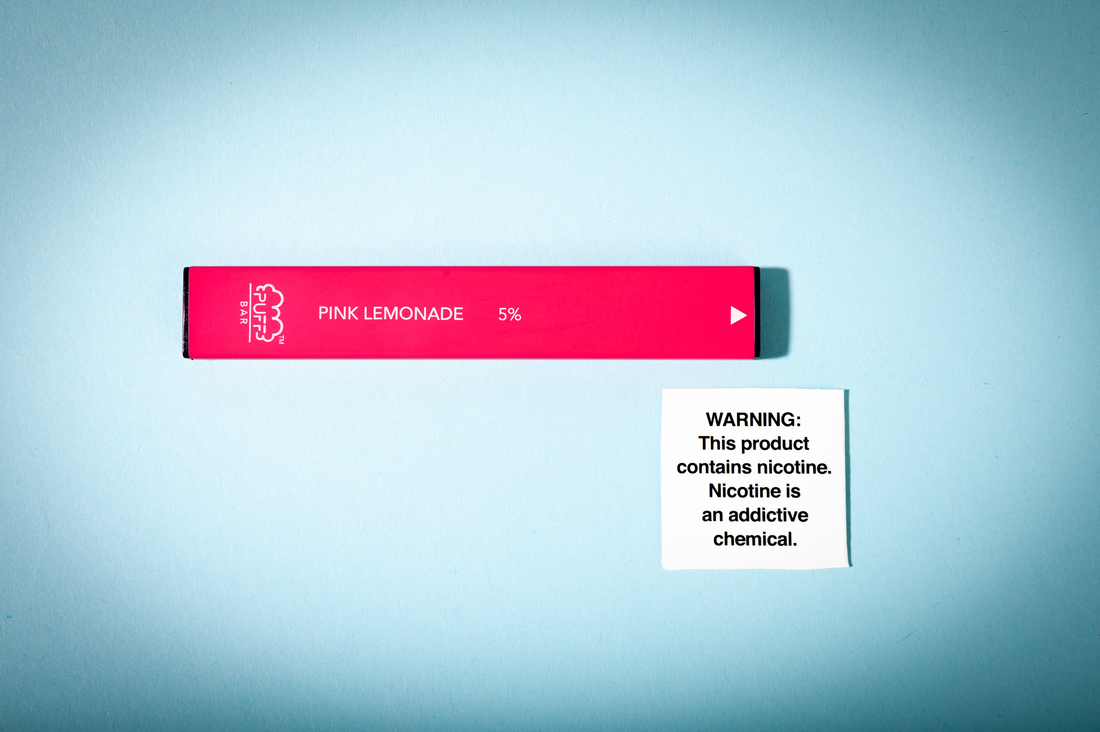 The Puff Bar, 3.75 inches long, comes in a range of sweet and fruity flavors, like Pink Lemonade. Disposable flavored vapes like this are growing popular among teens.

Some of the most popular new products, such as Puff Bar, come in an array of appealing flavors — similar to what Juul used to sell, says Myers of the Campaign for Tobacco-Free Kids.

“This one is pink lemonade,” Myers says as he shows me a Puff Bar. It’s a vape pen that looks like an elongated thumb drive.

“And when you inhale it, it has a sweet, sugary flavor,” says Myers. These flavors cut the harshness of the tobacco. “Young people are inhaling more deeply and getting higher levels of nicotine in their lungs than they would have with a cigarette.”

(NPR reached out to the makers of Puff Bar, via an email listed on the product packaging, to ask about marketing and sales of the product. The company did not respond.)

“The Puff Bar is an extremely popular product,” says Bonnie Halpern-Felsher, a developmental psychologist at Stanford University. One bar has about 300 puffs and can contain about as much nicotine as two or three packs of cigarettes. “That’s a lot of nicotine,” she says. And, research shows nicotine is addictive and harmful to adolescents’ developing brains.

She says because these products are so new, and the landscape changes quickly, it’s difficult to know how many teens are using them and similar disposable products.

But she received a bag of confiscated vape sticks and pens that a high school principal in northern California collected recently and shared with her.

“When I laid them out, the majority of them are disposable products,” Halpern-Felsher says. “They come in lots of flavors, colors, [they’re] very attractive to youth and that’s what we’re seeing them using the most right now.”

What can concerned parents do?

“We know that teens don’t respond well to just being told about harms or scare tactics,” says Halpern-Felsher. She says if you start a conversation by saying “Johnny, you’re not vaping, right?” you’re not likely to get far.

Instead, start by telling your teen what you’ve learned about vaping — and why it concerns you. Say something like: “I’ve learned how much nicotine is in the products, what have you heard?” Engage them in a conversation to share information.

Then, through that conversation, “it [may] come out whether or not the adolescent is using,” she says. “If you find out they’re using — tell them you’d like to get them help.”

2) Know what products are still available

“Before you sit down with your kid, read up on the latest products. Know what they look like and know what the lingo is, ” advises PAVE’s Berkman. PAVE offers a toolkit for parents.

In addition to disposable vape sticks, there are refillable cartridges and flavored nicotine liquids, often called “e-liquids” available. “Right now, you can buy e-liquids on-line, often on websites that are not really age-protected,” Matt Myers says. “And increasingly [they’re available] in convenience stores and gas stations,” he adds.

He says the product manufacturers “have figured out how to deliver more nicotine to young people than the cigarette manufacturers ever did,” so they can be highly addictive.

“Sit down with your young people to make sure they understand that these products are not safe and that they run a serious risk of an addiction,” Myers says.

There are a number of online, digital QUIT programs. For instance, My Life My Quit is available in more than a dozen states. The Truth Initiative offers a text-based quitting program that young people can sign up for by texting DITCHJUUL to 88709.

For more information, parents and educators can search an online resource from the Truth Initiative of research and reports about emerging tobacco products. And Halpern-Felsher and a team of collaborators have created a tobacco-prevention toolkit.

How The Coronavirus Outbreak May Impact The 2020 Census : NPR