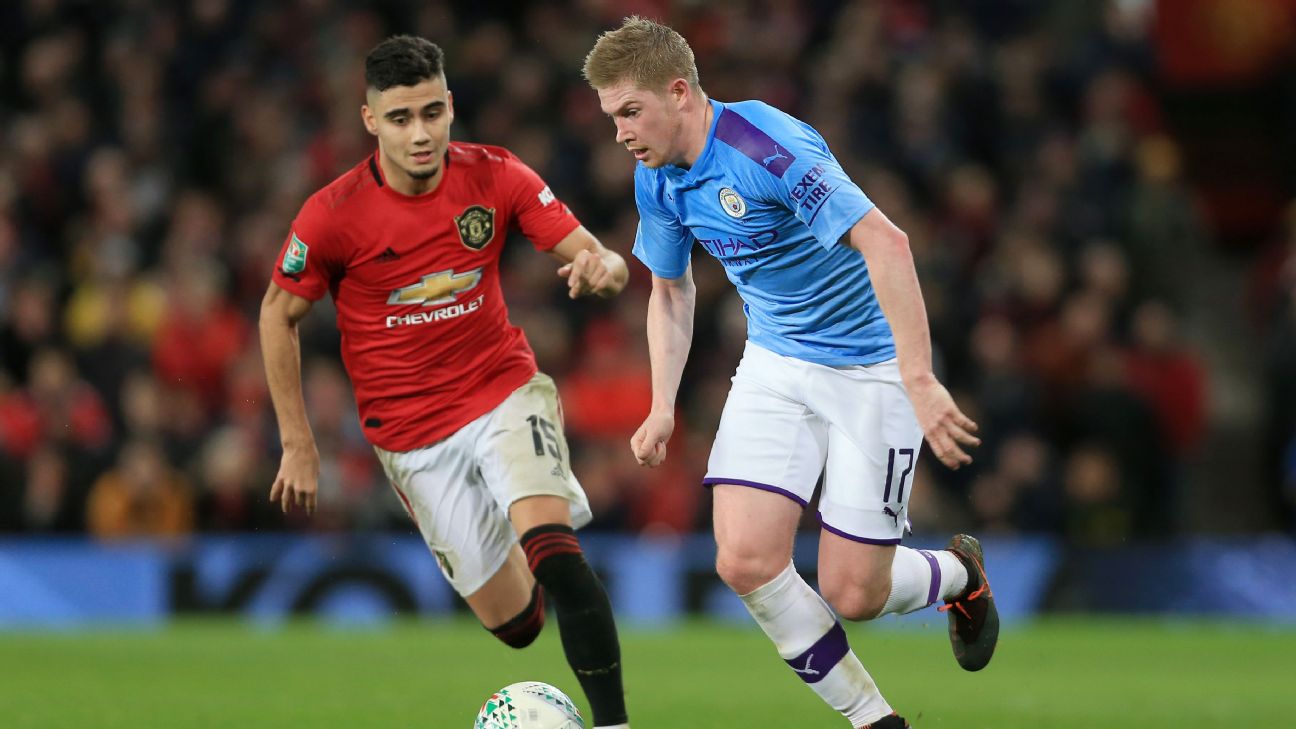 They don’t tend to care about the Manchester derby in Liverpool — especially when the Anfield club are riding high, 22 points clear, at the top of the Premier League — but when Manchester United face Manchester City on Sunday, Jurgen Klopp should be watching closely.

First of all, Klopp will know that if City drop points then it will enable Liverpool, who host Bournemouth on Saturday, to wrap up the title as early as March 21 with a home win against Crystal Palace (if they beat Bournemouth and Everton beforehand.) But while events at Old Trafford this weekend will have a direct impact on where and when Liverpool can end their 30-year wait to be champions of England, the real importance of the game to Klopp and his players is about next season and which of United and City will emerge as the biggest threat to Liverpool’s hopes of defending their crown.

Much can change in football, and it can often change quickly, but the field of contenders for next season already appears to be focused around Manchester.

Chelsea are a team in transition under Frank Lampard, with their recent loss of form in the Premier League threatening their hopes of a top-four finish this season, while seventh-placed Tottenham are hardly showing signs of promise under Jose Mourinho. Across London, Mikel Arteta has clearly had a positive impact at Arsenal since taking charge in December, but the Gunners need to rebuild their squad this summer and do not possess the financial muscle of their rivals to do it quickly — especially as they look set to miss out on a lucrative place in next season’s Champions League. (They’re 12 points out of the top four with 11 games left.)

Leicester and Wolves could both be in Europe next season, but their biggest challenge will be keeping their star players out of the clutches of the top clubs. With interest already rising in their key players (James Maddison, Adama Traore), both risk being weakened in the transfer market by the time the 2020-21 campaign begins.That leaves United and City to lead the charge.

Right now, the smart money would be on City once again emerging as the closest challengers to Liverpool because, while Pep Guardiola’s squad need improvement in key areas, they still possess enough world-class players and depth to go again next season. That said, the prospect of UEFA’s two-season Champions League ban could have a major impact on transfers at the Etihad if it is upheld.

Backed by the enormous wealth of their owners, City can also rely on a proven strategy of recruitment and scouting. Director of football Txiki Begiristain has a seamless relationship with Guardiola and chief executive Ferran Soriano, so the club can, and does, get deals done quickly and efficiently. If City remain able to buy and sell this summer, they will fill the holes in their squad — at centre-back, left-back and in midfield — and start next season as the No. 1 threat to Liverpool. A few new additions, allied to the trophy-winning experience and proven talent of Kevin De Bruyne, Raheem Sterling, Sergio Aguero, Bernardo Silva and many more, will make City a formidable outfit again.

It will be harder for United to get there. Question marks still hang over Ole Gunnar Solskjaer’s future as United manager, especially with former Spurs boss Mauricio Pochettino ready to return to management this summer, and they sit in fifth position, three points adrift of fourth spot, so are not guaranteed Champions League football next season. They already have a thin squad and being out of the biggest competition again will make it tough for United to attract the quality players they need to be competitive again. Failing to qualify for the Champions League could also signal the end for Solskjaer.

United’s results this season have been wildly inconsistent, with defeats against struggling Watford, Bournemouth and West Ham in stark contrast to victories over City, Chelsea, Spurs and Leicester, as well as a home draw against the dominant Liverpool. But while United have been infuriating at times this campaign, there is a sense that a corner has been turned this year. The defence is beginning to look organised and competent again following the summer signings of Harry Maguire and Aaron Wan-Bissaka, while the €80m January arrival of Bruno Fernandes has given United the star quality and goal-threat from midfield that they have lacked for too long.

Up front, Marcus Rashford, Anthony Martial and Mason Greenwood have netted 45 goals between them in all competitions and there is genuine quality in that youthful forward line which could take United a long way, with the right additions. But the big question surrounding United is whether they possess the expertise off the pitch to capitalise on the promise that is being shown on it.

If United are able to land their targets this summer, they could become a title challenger next season, albeit an outsider, behind Liverpool and City. Borussia Dortmund’s Jadon Sancho, Napoli’s Kalidou Koulibaly, Ajax midfielder Donny van de Beek, Aston Villa’s Jack Grealish and Leicester’s Maddison are all on United’s shortlist. They will not sign all of those players, but if they can get three of them, they will be back in the game, even if their squad is weakened by the seemingly inevitable departure of Paul Pogba.

This is a huge summer for both United and City. Right now, only City have the track record to suggest they will make the right decisions and signings; if United can confound the critics, seal a place in the Champions League and get deals done, they are capable of fighting it out for the title next season too.

So it would be well worth Klopp watching the 182nd Manchester derby on Sunday because next season’s biggest rival will be on display.