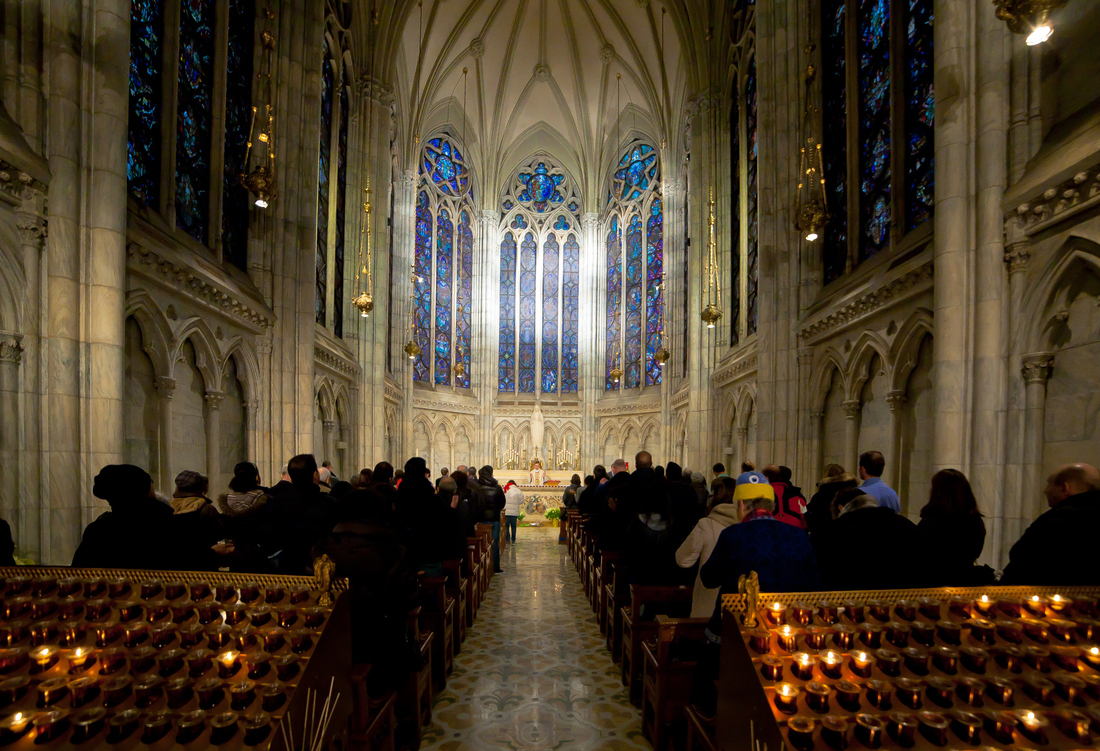 Catholic worshipers attend Mass at Saint Patrick’s Cathedral in New York City. Celebrating Holy Communion without shared wine is fine, in the age of COVID-19, many churches have decided. 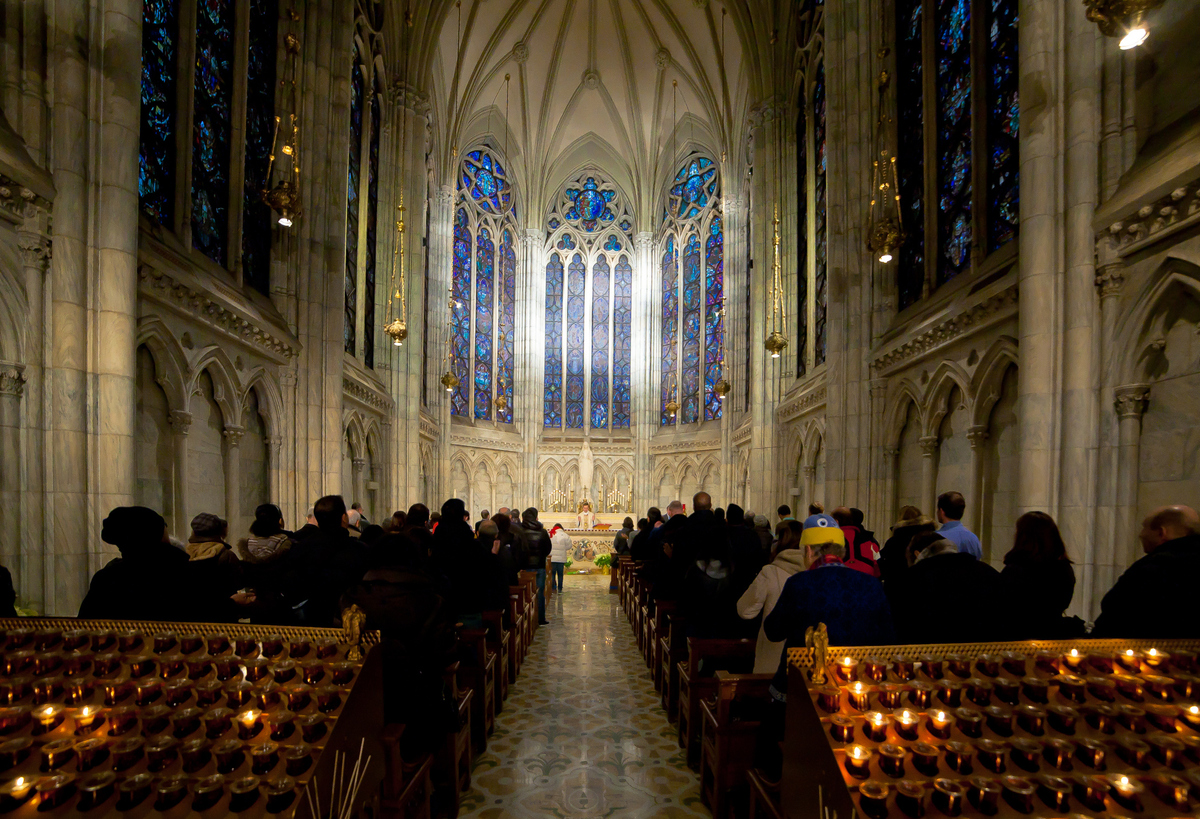 Catholic worshipers attend Mass at Saint Patrick’s Cathedral in New York City. Celebrating Holy Communion without shared wine is fine, in the age of COVID-19, many churches have decided.

Before she was the interim minister at the Central Christian Church of Austin, Janet Maykus was a chaplain in health care settings, a job that required training in infectious disease control. So when she heard reports of the coronavirus spreading in some U.S. communities, she knew it was time to overhaul religious practices at her church.

Last Sunday, instead of offering Communion wine in a shared cup from which all congregants drink, Maykus’ service did away with the wine altogether. Also gone for now is the practice of intinction, or dipping the consecrated bread or wafer in the wine.

Communion, in her church, is now offered only as bread — dispensed by elders who first disinfect with hand gel before using tongs to pick up the individual pieces and place them in congregants’ hands — all to avoid contaminating the bread basket with any germs that might be on their fingers.

“I don’t want to be alarmist,” Maykus says, “but as I told our congregation on Sunday, we’re a part of creation and we share this creation with viruses. And so we need to learn how to learn to live with them in a way that makes everyone safe.”

As more cases of coronavirus are confirmed in the U.S., clergy across the country are reconsidering a variety of practices during religious services. Infectious disease experts praise the move.

The Episcopal Dioceses of Los Angeles this week told its congregations to stop offering Communion wine. Christian religious leaders at the regional level of various denominations in Chicago, Seattle, Houston, San Francisco and elsewhere have taken similar actions. Some, like the Catholic Archdiocese of St. Louis, are asking clergy not to use the shared Communion cup.

Hilary Babcock, an infectious disease specialist at Washington University, says that’s a good idea. “I advocate for people not sharing food utensils, glasses and cups. So, in general, I think that’s higher-risk than if there is a way to allow people to have individual cups or individual containers that they are using and either disposing of or having cleaned afterwards.”

Although Communion wine does contain alcohol, it’s probably not enough to kill the coronavirus that causes COVID-19, adds Caitlin Rivers, an infectious disease specialist with the Johns Hopkins Center for Health Security.

The coronavirus spreads through respiratory droplets that can be produced when an infected person coughs, sneezes or talks — and those droplets can find their way to people nearby, or land on a surface that you end up touching — contaminating your hands. And if you shake hands, you might pass those germs on.

So in many houses of worship of all faiths, handshakes are being discouraged, sometimes replaced with alternatives like waves or elbow bumps. At the Prayer Center in Orland Park, Ill., Imam Kifah Mustapha says he’s advised people not to shake hands after prayer, as many commonly do, and he’s telling people that if they are sick, they are exempted from obligations to attend daily prayers and Friday sermons.

Mustapha notes that washing most of the exposed parts of the body — including the nose, hands, face, neck and feet — prior to prayers is already part of Islamic religious practice. “We already have a hygiene perspective from our religious tenants,” he says. Even so, he notes, the center — where about 1,800 people come for Friday sermons — is also vigorously disinfecting common areas after the service.

Rivers says now is a good time for religious leaders to think through all the parts of their services “and identify all of the times when people come in contact either with each other or with a shared common service, and then try to decide whether those moments can either be removed from the service or whether there is another meaningful, comfortable replacement that could stand in for that.”

While experts advise staying three to six feet away from an infected person to avoid catching the coronavirus, Trish Perl, chief of the infectious diseases division at UT Southwestern Medical Center notes that people attending religious services, or other events, are often spaced much closer than that to each other.

“A lot of times you’re putting vulnerable people together — the elderly — etc.,” Perl says. “So, to me, that’s the risk.”

Other epidemiologists note that the main driver of how the virus has spread so far does not seem to be the sort of temporary, casual contact experienced in church services, but rather “household-level infection — the kind of prolonged exposure family members face when living with or caring for somebody who is sick with the virus. (A religious group in South Korea that was the center of a COVID-19 outbreak in recent weeks had some particular practices that may have increased the spread there, observers say.)

Rivers adds that if coronavirus starts circulating widely in their community, people considered to be at high risk of developing severe disease if infected — like the elderly and those with underlying health conditions — should consider staying home from services. “Or maybe [find] a replacement for that need — like a one-on-one phone call with your religious leader could be helpful.”

“I think every congregation is is going to have to find something that works for them,” Rivers says.

Maykus of the Central Christian Church of Austin says she’s already thinking about how to keep ministering if coronavirus starts spreading in her community, because she has a number of elderly and immunocompromised congregants. If that happens, she says, she could conduct services from her home and broadcast them online for congregants to watch from theirs.

“I emphasize the need to find replacements for further transmission opportunities that lower the risk, because attending religious services is really meaningful to a lot of people,” Rivers says. “And I think advising that nobody do that anymore is not a practical solution.”

What Does A Sick Tiger Mean For Your Cat? : NPR