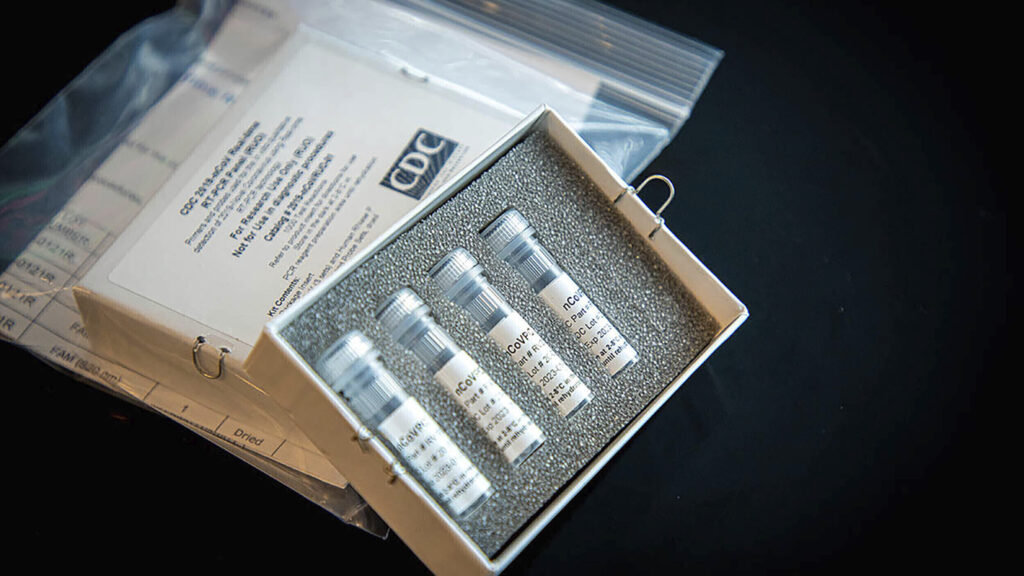 The push to increase testing in the U.S. for the novel coronavirus that causes Covid-19 has hit a new stumbling block: shortages of key chemicals needed to start up and run the tests.

In particular, one key product, made by the diagnostics testing giant Qiagen, is in dwindling supply. The chemical is used to isolate the virus’ genetic material, or RNA, so that it can be tested.

Robert Redfield, the director of the Centers for Disease Control and Prevention, told Politico, which first reported the story, that he is worried about the supplies labs have of the chemicals, known as reagents.

“The availability of those reagents is obviously being looked at,” Redfield said Tuesday. “I’m confident of the actual test that we have, but as people begin to operationalize the test, they realize there’s other things they need to do the test.”

A Qiagen spokesperson acknowledged that “extraordinary” demand was limiting the company’s ability to supply some products, and said workers at its Hilden, Germany, and Barcelona, Spain, manufacturing sites were moving to work three shifts, seven days a week in order to ramp up production. The company is also bringing on new staff and making better use of a site in Germantown, Md., to try and make the test kits.

Still, that and other shortages related to test kits represent another hurdle in the effort to roll out diagnostics to detect whether patients are infected with the new coronavirus, a key step in preventing or slowing its spread. Other countries, such as China and South Korea, have tested many thousands of patients. But the U.S. has lagged even as the virus has started to spread — there have been 647 cases of Covid-19 in the U.S. and 25 deaths so far — having conducted only 5,000 tests to date. The American Enterprise Institute estimates that the country may now have the capacity to run 15,000 tests a day, but that assumes that reagents are available.

“We are deeply concerned that as the number of tests increases dramatically over the coming weeks, clinical labs will be unable to deploy them without these critical components,” the American Society of Microbiology said on its website. “Increased demand for testing has the potential to exhaust supplies needed to perform the testing itself.”

Michael Mina, a pathologist and assistant professor in the Center for Communicable Disease Dynamics at the Harvard T.H. Chan School of Public Health, said that the lack of the Qiagen kit and a similar one made by Roche represent “a very big problem.”

“These are usually very commercially available tests that every research lab uses; molecular biology labs across the world use these,” Mina said. “They’re very common and we don’t normally worry about them going out of stock. But at the moment, they are out of stock.’’

Mina said that not only is the Qiagen product on backorder, so is another that might be used, from Roche. But part of the problem is that those reagents are used on different pieces of laboratory equipment made by their respective manufacturers. All labs wouldn’t have both.

“I would love to say, yes, there’s all these different options,” Mina said. “But we really run into problems because we can’t actually use these kits if we don’t have the instruments for them.”

The Food and Drug Administration said that it is monitoring the issue, and it hosted a webinar and town hall last week for the laboratory community as well as fielded questions from manufacturers about “alternative reagents, extraction methods, and platforms.” The agency also posted an FAQ page Tuesday on coronavirus diagnostic testing that lists potential alternatives. Mina said he was unsure that the page would speed up getting tests running, but said it at least clarified what needed to be done.

But the chemical for extracting RNA did not seem to be the only product running short as the U.S. tries to quickly ramp up its testing capacity. On Friday, Christopher Freeman, a laboratory administrator at Columbia University, sent an email to colleagues pleading for another product, used for storing RNA, made by Invitrogen, a unit of lab tools giant Thermo Fisher. He said his lab hoped to validate its Covid-19 test over the weekend, but that it needed the “a basic yet critical reagent that is required as per the FDA submission.” He asked if any laboratory had the reagent stocked in its laboratory.

A Columbia spokesperson said that the lab received a six-month supply of the necessary reagent from New York state and is in the process of validating its test. A Thermo Fisher spokesman said that the Invitrogen product should not be in short supply.

But some experts in the laboratory industry say that shortages may partly be the result of trying to have labs ready their diagnostics too quickly, and that preparations should have begun months ago.

Mike Pellini, a doctor and longtime diagnostics executive, said that it has been too difficult for new tests to come online and be reimbursed. In this case, work that should have taken two months has had to be “crammed into a few days or a week,”  said Pellini, now a managing partner at Section 32, a venture capital firm.

“Industry has been prepared to engage for a while, but there was little receptivity on the other side until last week,” Pellini said.

Budding Altruists? Tots Give Up Food for Others

Sarepta’s ongoing FDA saga & the latest on the China virus