Rogeting: why ‘sinister buttocks’ are creeping into students’ essays | Education 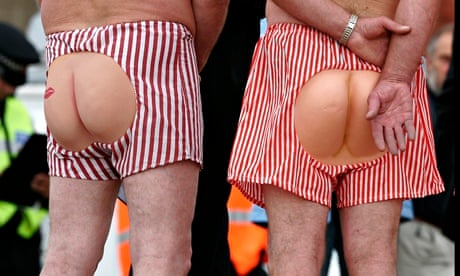 Age: A modern twist on an age-old practice.

Any one of those, yes. OK. Very well. As you wish. It is the practice of students replacing words and phrases in essays they have copied from the internet with supposedly synonymous alternatives in order to disguise their plagiarism.

How so? Chris Sadler, the lecturer who coined the neologism did so after coming across a number of phrases in his business students’ work that did not make sense.

Eh? Pardon? Huh? What? A tin-eared translation of “to stay ahead of the competition”. Now try “Herculean personalised liturgies”.

These students are idiots. Morons. Dunces. Block/bone/pinheads. Derbrains. ‘Nanas. “Even if the sentence had made sense it seemed out of place in [a paper on] business information systems and I was motivated to seek out the source,” Sadler said.

Is he actually Rogeting as he speaks? No – all business information systems lecturers sound a bit like that.

Well, set a bandit, crook, pilferer, plunderer to catch a larcener, criminal, defalcator, cheat I suppose. He has entered his favourite Rogetism in the annual competition held by the Times Higher Education Supplement to find the most grievous, glaring, atrocious, egregious exam mistakes.

Which is? “Sinister buttocks”.

What was that in its original incarnation? Let me guess … scary bum from “frightening tramp”? No, I’ve got nothing. It’s a freeform restyling of the simple phrase “left behind.”

Idiots. Morons. Dunces. Et cetera. And so on. And so forth. “[There’s] no attempt to understand either the source or target text,” says Sadler.

I couldn’t have put it better myself, Mr Sadler. Mr Sadler, Burdener, Inflicter, Encumberer, Loader or possibly Farrier thanks you.

Don’t say: “Thanks, Jimi, that sounds like a plan.”

‘I was always told I was unusual’: why so few women design video games | Education