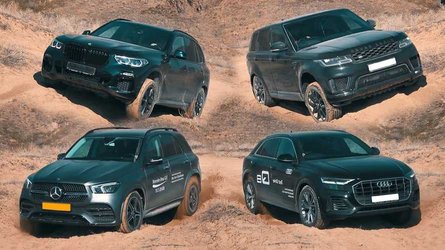 It’s no secret that most SUVs today spend most of their lifetime exclusively on paved ground getting from A to B. Be that as it may, manufacturers haven’t thrown in the towel when it comes to getting its hands dirty; many systems like Quattro all-wheel-drive and even low-range gearboxes are still alive and well. But while getting filthy in the wilderness isn’t at the top of most automakers’ priorities, the big vehicle aficionados at SUV Battle put the current crop to the test against a fearsome off-road track.

The course involves a dirt climb with three major obstacles. First comes a rutted section that the vehicles must pass through without any off-road facilities engaged. After a brief rest, competitors must clear a more demanding obstacle where all four wheels aren’t guaranteed contact with the dirt. The flourish to the finish involves a balancing act where the front-left wheel almost always distances itself from the ground.

From the start, it’s clear that power isn’t the great equalizer when the going gets tough. Many different factors like tires, weight, and traction control systems can play a part in performance; while the BMW X6 struggled to get through the first couple of obstacles, its countryman the Audi Q8 breezed through with immense confidence, leaving the ultimate tarmac specialist in its wake.

When we get to the Range Rover Sport, the brand’s off-road pedigree is immediately evident. While you’d think its supercharged 5.0-liter V8 would spin the wheels to victory, the vehicle was much more reserved than you’d expect. Sure, you could argue it wasn’t operating at James May speed all the way to the top, but the vehicle also didn’t dig itself a massive hole.

As the drivers in the first round were of vastly different skill levels, it was decided that the best pilot would take the same crop of vehicles out again to see if they could produce any different results. Rather unsurprisingly, things were very similar – at the top it was still a toss-up between the Range Rover Sport and Audi Q8. While the German SUV did face adversity with an overheating transmission, it still produced very impressive results.

After tons of testing with the off-road track at its absolute worst, it was time for the Range Rover to strut its stuff. Clearly the class of the field, the British contender kept calm and carried on with a little wheelspin here and there but amazing traction throughout the run. We wouldn’t hold our breath to see it on the start line of next year’s Baja 1000, but it’s clear that the Range Rover has some off-road panache.

Toyota Yaris Crossover Planned To Sit Below The C-HR

Mercedes G-Class Electric Version Due ‘In A Few Years’