Check Out What Happens Underneath A Drifting Toyota Supra 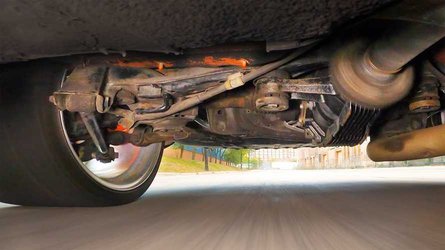 With action cameras getting smaller and more advanced, they’ve made it possible to capture never-before-seen angles. Continuing his series of unique automotive footage, Petrolhead and YouTuber Matt Mikka of Warped Perception takes the GoPro Hero 9 for a test drive inside the tires and underbelly of his Toyota Supra.

As a greenhorn to the action camera tire craze, it was incredibly satisfying to see the bead pop on the rim from an exterior and interior perspective. Equally eye-opening was seeing a visual representation of how much the tire tread gives in comparison to the sidewall.

While we are strongly against drifting around on public roads, Mikka had a couple of buddies with him to block traffic for the test runs. A series of mild slides around the quiet stretch of road produced some expectedly interesting footage; clearly a bumpy surface, the tire tread didn’t deform as much as we expected under the tremendous load asked of it during a drifting scenario.

Thankfully, unlike the previous GoPro in-tire video where he did a burnout to failure, the latest flagship camera remained safe and sound throughout its stint inside the tire. After a couple of runs, we get a look at the second angle under the car looking at the rear wheels. We know the underbelly view isn’t a world first, but being able to see the suspension components and driveline moving under load was certainly a sight to behold.

Matt Mikka said that he’d certainly be open to collaborating with Formula Drift drivers and teams to get a look at what the forces a bespoke race car does to the rubber. Regardless, action camera capabilities never cease to amaze us with the incredible angles and situations they are able to capture.

Toyota V8 Engines Will Be Killed And Replaced With Twin-Turbo V6: Report