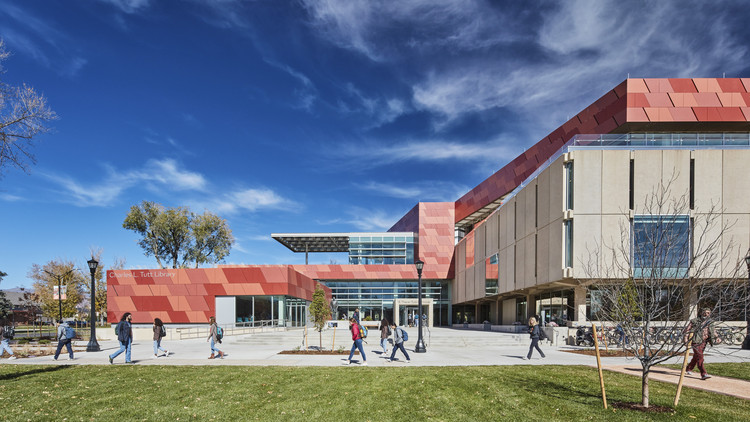 Text description provided by the architects. The renovation and addition followed the planning principles and recommendations established in the 2008 Colorado College Long Range Development Plan (LRDP) and Phase I of new campus development.  Attention to open space, the transition between interior and exterior spaces, flexibility of space to support a variety of activities, and integration of programmed spaces encouraging social and intellectual interaction is addressed in the project.

The project scope included a new, large addition to the west, a minor addition to the east, and a new fourth floor added on top of the existing building, along with renovations to bring the building up to codea complete renovation of the existing facility. A critical aspect of the design was achieving the College’s goal of carbon neutrality by 2020, making the renovated facility the nation’s current  largest (94,000 sf) academic library designed for net-zero energy

Our work began with program confirmation and concept design, which helped establish the vision for the enhanced facility, which was originally designed by Walter Netsch in 1961, and expanded in the 1980’s. The design reflects the changing nature of the Library and the values of the College, providing formal and informal spaces to bring the community together. Upon completion of the renovations and additions, Tutt South, the 1980’s addition which expanded to the South into Palmer Quad, was demolished. This helped return the quad to its original plan, strengthening its importance and integrity.

This transformative project completely alters the building’s relationship to the campus, with new entries, a sheltered courtyard, and three new exterior spaces. Careful massing and strategically placed windows afford expansive views to Pikes Peak, reversing the building’s formerly inward focus. A visual reference to the geographic context is made the exterior cladding with red panels—referencing the locally mined red sandstone—that define the addition and connect it to the existing building.

LThe library services and resources are augmented with academic programs and instructional spaces—including an experimental classroom—, that flex into open and group study spaces in the afternoon and evening.  The renovation and additioaddition n, ddoubled seating capacity, and new spaces and services supporting digital scholarship, including a GIS Lab, Tech Sandbox, data visualization suite and a large indoor/outdoor event space were created.

Alongside library research assistance, the Colket Center for Academic Excellence includes the Quantitative Reasoning Center, Writing Center, First Year Experience Program, as well as ESL and Thesis Writing Specialists. The building also houses a café and a host of instructional spaces that “flex” into open seating.numerous indoor/outdoor spaces that allow for the academic library experience to move beyond the walls of the building

To support the college’s unique Block Plan schedule, during which one subject is studied intensively for three and a half weeks and access to materials has to be immediate, most of the general collection remains in the building, accommodated in new, openly accessible compact shelving, while special collections are housed in a specially designed vault.

Increased space, access, light, a variety of seating configurations and technological innovations have transformed and reinvigorated Tutt, establishing it as the intellectual heart of the campus and the Colorado College community.