The two months in 1980 that shaped the future of biotech 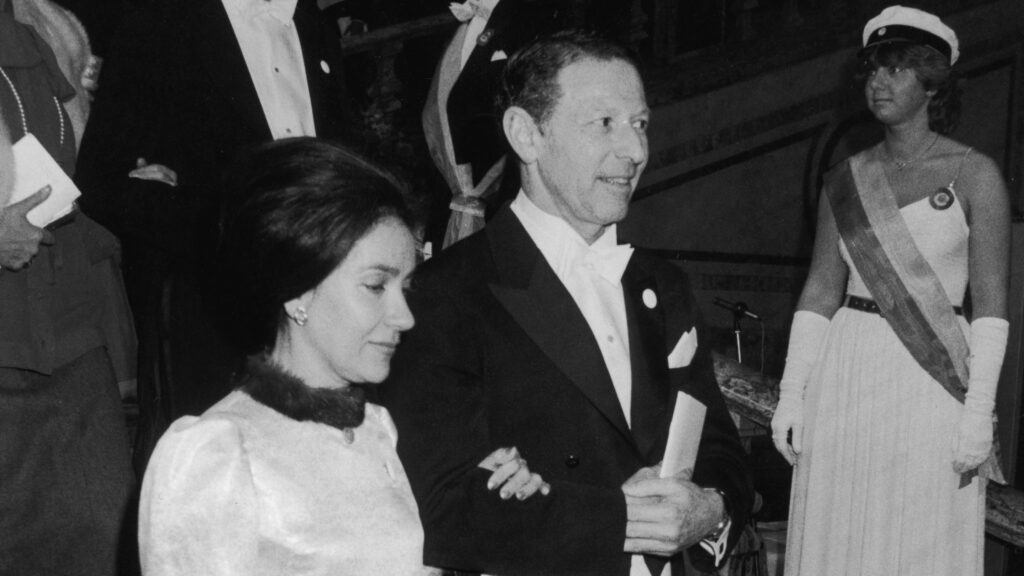 In the course of just under two months that started 40 years ago this week, five events occurred that shaped the biotechnology industry and bioscience research. Looking back on these seminal events is a reminder of the odd ways in which change happens.

Early in the morning of Tuesday, October 14, 1980, the phone rang at Paul Berg’s house in Stanford, Cal. The jangling phone worried Berg and his wife because Berg’s father was old and ill, and they feared the worst. Instead, Berg heard the voice of his Stanford colleague, Arthur Kornberg, telling him that Paul had been awarded the Nobel Prize for Chemistry. The Swedish Royal Academy had been unable to find Berg’s unlisted phone number, but one of Kornberg’s sons had heard the news very early in the morning on the radio and called his father, who called Berg.

Berg won half of that year’s prize for basic research into nucleic acids and for “certain aspects of recombinant DNA.” The other half was shared by Frederick Sanger and Walter (Wally) Gilbert for their discoveries about how to sequence DNA.

Many scientists, at Stanford and elsewhere, made important contributions to the development of recombinant DNA; some have questioned why Berg was the sole recipient. The prizes are always difficult to award, particularly with the Nobel Committee’s self-imposed limit of no more than three awardees for any prize (except for the Peace Prize).

Once the chemistry committee decided to recognize Sanger and Gilbert for sequencing — each had made substantial progress in very different ways — that left only one slot for recombinant DNA. No one doubts that Berg and his lab made major contributions to the field and were driving forces in its advance. But Berg had another role that made him stand out from the crowd. He was a leader, arguably the leader, in organizing a temporary moratorium on recombinant DNA research and in organizing and running the famous Asilomar conference on recombinant DNA at which the moratorium was discussed.

Around the same time Berg was learning he had won a Nobel Prize, the common stock of a 4-year-old biotech company named Genentech made its initial public offering on the New York Stock Exchange. Genentech’s business was based on recombinant DNA and its first products (still two years in the future at that point) were human proteins made by bacteria into which human genes had been slipped using recombinant DNA techniques. When the market opened, the stock traded for $35 per share. By the end of the day investors had blasted its price higher — all the way up to $88 per share — before closing at $71.

The first biotech boom was on, leading many other fledgling biotech startups to go public in the next few months. Did Genentech’s impressive IPO owe any of its oomph to that morning’s announcement of Berg’s Nobel Prize for recombinant DNA? We can never know.

Exactly one week later, on October 21, President Jimmy Carter signed into law the Stevenson Wydler Technology Innovation Act. It responded to concerns that government-sponsored technologies were not being commercialized frequently enough. The act encouraged U.S. national laboratories, such as Fermilab, Brookhaven, Oak Ridge, Los Alamos, and the Stanford Linear Accelerator Center, among others, to spread information about government-owned technology, in part by requiring them to establish Offices of Research and Technology Applications that were to identify and promote technologies with strong commercial potential. The Carter administration supported this bill in part because it kept control over who would commercialize those new technologies in the hands of the federal government.

This is the least important of the five events for biotechnology. The National Labs, though engaged in a surprising amount of biological research for organizations derived from nuclear weapons research, were not then hotbeds of bioscience and biotech innovation.

Tuesday, December 2, marked the fourth, quietest, but not the least important of this string of biotech events. The U.S. Patent and Trademark Office granted U.S. Patent No. 4,237,224, “Process for producing biologically functional molecular chimera,” to two inventors, Stanley N. Cohen of Stanford and Herbert W. Boyer of the University of California, San Francisco. The patent was assigned to Leland Stanford Junior University and the Regents of the University of California. As my colleague Jacob Sherkow and I wrote in 2015:

“That patent, the result of research conducted in 1974 on a process of creating recombinant DNA, i.e., recombining genes, appeared to be the holy grail for geneticists. Rather than tedious mutational or crossbreeding studies, the Cohen-Boyer technology allowed genetics researchers to study — and create — genes in isolation. With increasing research into the function and characterization of restriction enzymes, recombinant DNA technology opened doors for researchers to both isolate and purify individual genes as well as create analogs of their own.”

I haven’t been able to find any significant publicity about this patent around the time it was awarded, but for the next two decades the Cohen-Boyer patent formed the cornerstone of both the biotech industry and of much biological research. It broadly claimed the methods of recombinant DNA and earned its assignees about $400 million.

Stanford administered the Cohen-Boyer patent and took 15% of the proceeds for its trouble. The remainder was split evenly by Stanford and the University of California system, which distributed them in different ways. Stanford’s practice was (and remains) to give one-third of the proceeds to the inventor, one-third to the inventor’s department, and one-third to the inventor’s school. This bonanza for Stanford Medical School’s genetics department, of which Cohen was a member — about $70 million — did not endear it to Berg’s and Kornberg’s biochemistry department, which had done, in Berg’s lab and elsewhere, much of the research on recombinant DNA. On the other hand, the genetics department had been none too pleased by who had (and had not) received the Nobel Prize.

It isn’t clear to me if anyone fully realized at the time the patent was granted how important — or lucrative — it would be. Eventually, though, the Cohen-Boyer patent helped change how universities approached commercializing research. Its large returns prompted first scores, and then hundreds, of colleges and universities to open technology licensing offices. Today about 200 such offices exist, although only about a dozen are profitable in any given year (and these are largely the same ones every year, including Stanford’s and the University of California’s).

The fifth and final event took place on Friday, December 12, when then-lame duck President Jimmy Carter signed the Patent and Trademark Law Amendments Act, better known as the Bayh-Dole Act. This law gave universities and other nonprofit research institutions a clear and easy way to own intellectual property they created, in whole or in part, with federal research funding. It is often credited with having kickstarted the biotech industry. Along with the success of the Cohen-Boyer patent, it certainly encouraged universities to view some parts of biology as potential profit centers.

But it almost didn’t come to fruition.

When Indiana Democrat Senator Birch Bayh and Kansas Republican Senator Bob Dole first introduced into the 95th Congress the Small Business Nonprofit Organization Patent Procedures Act, it was a time of great concern about America’s economy, beset by the 1970s “stagflation” and the perceived economic challenge from Japan.

Congress did not act on the bill that year, but Bayh and Dole re-introduced it in the 96th Congress. Although Democrats controlled both the Senate and the House, President Carter opposed the bill. He wanted a more government-directed path, like the approach taken in the Stevenson-Wydler Act. Russell Long (D-La.), the powerful chair of the Senate Finance Committee, opposed the bill from a more populist perspective. He wanted the government to get as much profit as possible from any patents. The bill did not pass either chamber before the November 1980 election.

That election brought Ronald Reagan to the White House and also cost the Democrats 12 Senate seats, which would give the Republicans in the 97th Congress, starting in January 1981, their first Senate majority since 1954. One of the Democrats who would not be returning to the Senate was Birch Bayh, defeated by future Vice President Dan Quayle.

The 96th Congress, still with a majority Democratic Senate, held a lame-duck session after the November election, one of 16 such sessions in the 39 Congresses since 1940. The urgency for it came from the lack of budget authority for most of the government, but also for some other important, difficult, and controversial legislation that had been put off until after the election.

Strong support for Bayh-Dole in their ranks kept the soon-to-be majority Senate Republicans from opposing its passage. But for the bill to be voted on in that session required unanimous consent of the Senate — which meant a thumbs up from Long. He acquiesced, supposedly out of respect and friendship for his departing colleague, Birch Bayh.

President Carter did not give any indication whether he would sign the bill. The Constitution gives a president 10 days (not counting Sundays) to veto a bill, sign a bill, or let it become law without his signature. On the last possible day, December 12, Carter signed it.

It is ironic that the Cohen-Boyer patent was issued and assigned to Stanford and UCSF before Bayh-Dole made it easier for universities to patent inventions that had benefited from federal funding. Both institutions had used money from the NIH and private foundations in the relevant recombinant DNA research, but they did not have to wait for Bayh-Dole’s passage to patent the invention. A pre-existing patent agreement existed between the federal Department of Health, Education, and Welfare (the precursor of the Department of Health and Human Services) and Stanford’s Office of Technology Licensing that allowed Stanford and UCSF to patent the technology before Bayh-Dole took effect.

So in two days short of two months, the nascent biotech industry and university biotechnology research were propelled into the future with a Nobel prize, a stunning biotech IPO, two research commercialization acts, and a fundamental patent. And no one at the time seemed to notice their collective importance. True, there were other things going on then. During the first three weeks, Republican Ronald Reagan, who at the time seemed to be at the conservative extreme of American politics, was challenging moderately conservative Democrat Jimmy Carter, and on November 4 defeated Carter after only one term in office. For the entire period, 53 U.S. diplomats and citizens from the American Embassy in Tehran, Iran, were being held captive, marking their first full year of detention in early November. The economy was still reeling from the second oil crisis and its resulting high inflation (and was about to plunge into a sharp recession).

In the midst of all that, largely unnoticed, the building blocks of a new era in biotechnology came together.

And so it often is with history. Some crucial events are obvious; others sneak up on us. And blatant or obscure, through all these momentous historical periods, we go on with our day-to-day jobs, loves, and lives, only rarely looking back and noticing the times in which we lived — sometimes only after 40 years.

Henry T. Greely, J.D., is professor of law and professor by courtesy of genetics at Stanford University, where he directs the Stanford Center for Law and the Biosciences and chairs the steering committee for the Stanford Center for Biomedical Ethics. He thanks Jacob Sherkow and Robert Cook-Deegan for their helpful comments on the article, as well as his research assistants, Brittany Cazakoff and Cassidy Amber Pomeroy-Carter.